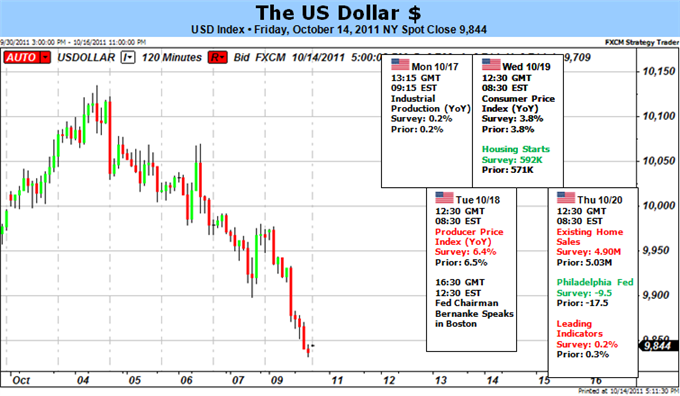 US Dollar Likely to Fall Further as Markets Dangerously Complacent

US Dollar Likely to Fall Further as Markets Dangerously Complacent

The US Dollar posted big declines on the biggest S&P 500 rally in over two years, sparked by a large shift towards risky assets and away from safe-haven currencies. The Dow Jones FXCM Dollar Index likewise posted its worst single-week decline since it set a major top in early 2009. Short-term momentum clearly favors further US Dollar weakness, but its record correlation to the Dow Jones Industrial Average emphasizes that direction could change on a moment’s notice.

A relatively quiet week of US event risk and a fairly sizeable drop in forex market volatility expectations points to a quiet week ahead. Markets will pay close attention to any developments on a highly-anticipated meeting of the Group of 20 (G20) finance ministers over the weekend. Yet it seems improbable that the G20 produces genuine resolution of ongoing Euro Zone crises, and the Greenback seems unlikely to respond to any half-measures.

A scheduled speech by US Federal Reserve Chairman Ben Bernanke and US Consumer Price Index inflation data could otherwise elicit reactions from Fed watchers and the US Dollar. Ultimately however, increasingly complacent financial markets could continue pushing the safe-haven USD lower across the board absent any major surprises.

We had previously warned that the US Dollar could see a large correction lower against the euro and other currencies, but we are beginning to wonder whether this is truly a correction and not the start of a broader dollar downtrend. The Euro/US Dollar fell over 1400 pips from late August into early October. It now trades nearly 750 pips off of those lows and has the psychologically significant $1.40 squarely in sight. Perhaps most impressively, the highly-correlated Dow Jones Industrial Average now trades slightly higher on a year-to-date basis despite fierce declines into early-month lows.

Some fundamental analysts argue that the Dow has rallied sharply on a real improvement in growth prospects for the US economy; we beg to differ. A stronger-than-expected US Nonfarm Payrolls report seemingly sparked the return to risk-taking across major markets. Yet the DJIA had seen massive declines into the first week of October, and the ensuing rally seems like a natural short-covering-driven correction. Indeed, stock market strength has come on exceedingly low trading volume; the S&P 500 posted a whopping 1.74% single-day gain on the lowest volume since mid-summer.

The implications for the US Dollar are relatively clear: we believe that the Greenback may continue to see short-term weakness, but a resumption of the broader equity market downtrend would likely push the USD higher into year’s end. In the coming week this means that the EURUSD could very well test the 1.4000 mark and the AUDUSD could hit fresh highs. Yet market conditions could change at a moment’s notice, and the recent wave of complacency is cause for concern.

The closely-watched S&P 500 Volatility Index (VIX) posted a record single-week decline on the dramatic stock market rallies. Such dramatic moves emphasizes that many had previously been betting on VIX gains (and S&P 500 weakness). Once positioning is fully unwound, however, bears may once again come out in force and the safe-haven US Dollar could rally sharply. - DR