US Dollar Looks to Deepening Financial Troubles for Guidance 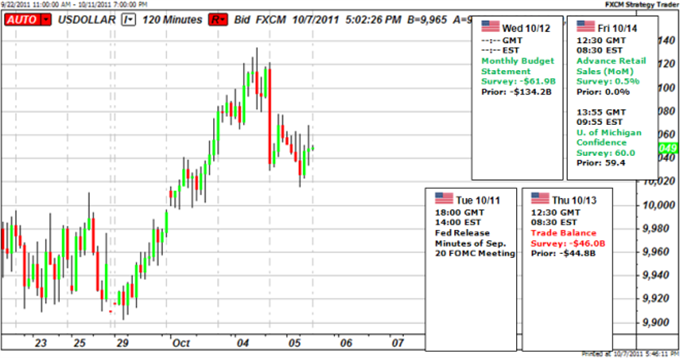 The risk aversion drive that has swelled since July eased significantly this past week; and the net effect on the safe haven US dollar was substantial. The greenback is not the typical safety asset. Rather, the benchmark requires a near-extreme level of fear to leverage its universal appeal: liquidity. Without an absolute shift in capital away from leverage and risky positions, there is little that the dollar can do to draw capital in. That reality was apparent this past week when a stabilization in capital markets (which is for most intents and purposes positively correlated to sentiment) and temperance in volatility led the Dow Jones FXCM Dollar Index (ticker = USDollar) to four consecutive daily losses and EURUSD to quickly rebound back above the closely-watched 1.3400 level. The question that we need to ask from here is whether this is a permanent reversal for the world’s most liquid currency or a temporary breather.

Before we project the dollar’s performance over the coming week; we need to first know its natural bearings under different market influences. Clearly, when financial conditions are falling apart; the need for an asset that will not freeze under extreme duress (the value of liquidity) sends capital to the US Treasuries and money markets via the greenback. The opposite extreme naturally has the opposite effect on capital flow as well as the greenback - considering fear is outweighed by the desire to make returns that US assets cannot provide with rates at or near record lows. Yet, we don’t need to prepare for a market-wide surge in sentiment as the larger downturn in global growth, the spread of the European crisis to the rest of the world and the cost of stimulus and austerity are deeply engrained.

Our concern through the immediate future is what happens in the middle ground. Considering the dollar provides so little yield and it is wholly a liquidity currency; there is a high threshold to encouraging its advance. When conditions merely stabilize – with capital markets trading sideways and volume easing – there is no panicked drive to keep the dollar in demand. We witnessed a cooling in fear this past week with the benchmark S&P 500 climbing through the period while turnover behind the market dropped back. That said, a dominant bear trend has established itself in the past few months which imparts upon the market a greater sensitive to negative developments than positive ones.

That means that the dollar and underlying sentiment will be more apt to turn to congestion than take to risk-positive performances until the headlines sour once again or a genuine reason to put capital back into risky assets comes along. It was the unexpected round of downgrades that crossed the newswires through Friday that should tell us how this likely to go next week. In the absence of critical, scheduled event risk next week (no NFP or ECB-level releases); the market is concentrating on the underlying fundamental themes. And, on this front, we are looking at the deepening and spread of the European financial crisis. Rather than focus on the sovereign ratings downgrades; we should look at the repercussions in credit conditions and banking-level blowback. With 3Q earnings season starting over the next few weeks; the potential tip the risk/reward balance in investment will be exceptionally high – and so too then is panic.

To further ensure that the greenback will take to deeper fundamental themes rather than be sidetracked by temporary factors; the economic docket is particularly light this coming week. The most market-dazzling data (retail sales and consumer confidence) doesn’t cross the wires until Friday – and it won’t likely curb market interest ahead of time. The FOMC minutes could carry some weight with more details on the future for policy after Operation Twist; but their efforts at transparency after the shift probably disarm that. – JK