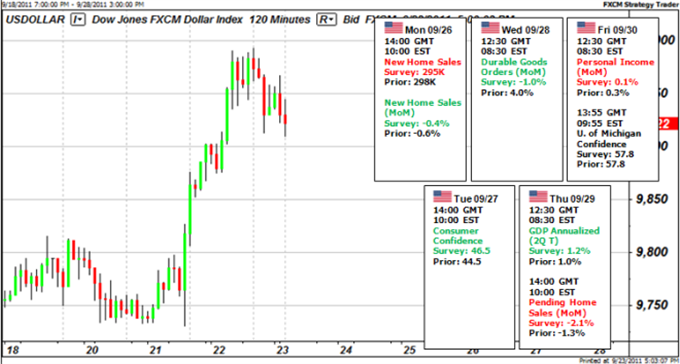 Risk aversion has once against overrun the markets; but the current situation is different than what we were seeing back in July / August. While that tumble covered remarkable ground; it would be more appropriately labeled a technical break. What we are seeing now is more fundamentally rooted. And, what makes it much more extraordinary (dangerous) is that extreme emotions are creeping in at the same time that we are testing the boundaries of stimulus and moral hazard. For the dollar, these are ideal conditions.

If we were to run down the list of appreciable traits for a currency, it is quite clear that the US currency is severely lacking. For the greenback: interest rates are near-zero and will likely remain there for a few years; economic activity is clearly slowing; pained markets are drawing capital away from efficient investments; and its prized safe haven status is under constant pressure (China’s Finance Minister this past week revived the call for the IMF to diversify its reserves). Under most circumstances, when the broader markets are stable or expanding; these problems would undermine the dollar’s appeal. However, there is one feature that the dollar possess and none of its alternatives come close to matching: proliferation. The currency is the primary reserve for the world, it is used in the bulk of currency exchanges and dollars are used for the bulk of the world’s purchases for physical goods and services. In other words, it is liquid.

A tame risk aversion move encourages capital to move from risky positions (those with a greater risk compared to their potential return) to a safe haven. This occurs in an effort to both avoid risk and to repatriate capital. However, in this orderly move; there are many alternatives to this ‘risk aversion’ shift with competitive safe havens and more prolific funding currencies. Yet, when fear turns into panic and the regular functioning of the markets starts to come undone; only the most liquid assets survive. That means: the dollar, US Treasuries and US money market funds are seen as a last resort.

To this point, we have seen the break in bullish momentum that began back in the first quarter of 2009 and was fueled by stimulus; and we have moved on to the need to unwind risk. For further progress into this descent into financial gridlock, we need the capital lines to start freezing and speculative interest in the short-side to increase. We are seeing both take place. In addition to the Fed announcing it had put a cap on stimulus; we saw major US banks downgraded (Bank of America, Citi and Wells Fargo), swap costs with Europe’s banking sector jump to a multi-year high and insurance costs (implied volatility costs, credit default swap premiums, etc) surge. We don’t need further negative developments to keep capital markets tumbling and the dollar rallying – it is now the dominant trend. Yet, we still need to be cautious about leveraging up behind the risk aversion move.

While the dominant trend in sentiment and price action have shifted; there are always corrections in larger moves. And, when it comes to a panicked selloff, there is a far greater precedence for intervention and manipulation. When capital and credit markets freeze, economies suffer and social unrest develops. In these instances, policy officials are spurred into action to force calm. Yet, what can they do this time around? The Fed (the largest central bank in the world) has tapped out of further stimulus. Efforts to stem the European crisis have been ignored because of in-fighting and the sheer cost involved with the expected recover. And, the investor, consumer and government of the world is simply still too highly leveraged. Expect coordinated efforts in the foreseeable future. These moves can generate short-term and volatile jumps; but they will not turn the tide. – JK