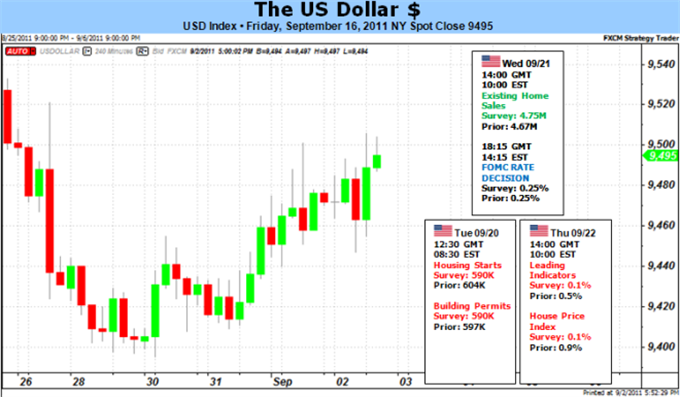 US Dollar Traders Ready for the Impact of More Fed Stimulus

US Dollar Traders Ready for the Impact of More Fed Stimulus

Whether it come in the form of an outright increase in asset purchases (QE3) or a shift in the composition of its current balance sheet, the Federal Open Market Committee’s (or FOMC) policy meeting this week is expected to hold the reins for direction and volatility for the US dollar and broader market sentiment going forward. This is the event that speculators have been waiting for. Rather than referencing scheduled event risk that needs to be interpreted for its impact on growth and financial conditions or tracking the deterioration in funding conditions; this particular incident promises a definitive outcome for speculators to either deliver temporary relief in moral hazard and heavy-handed purchases by a large buyer or remove one of the last bastions of hope for holdout bulls. Either way, this particular event promises to hold meaningful sway over the medium-term trend for the greenback.

The first thing we need to consider is why the market believes the Fed is even contemplating another effort to boost confidence, the economy and markets. After the $600 billion, QE2 program matured by the end of the third quarter, it was clear that the total impact on the market would fall far short of what officials had likely hoped would be accomplished. Rather than encouraging capital markets to rise in the afterglow of the massive program (like it did in the wake of the first round of support); the benchmark S&P 500 quickly stalled and ultimately tumbled into a step correction at the end of July. With the world facing a global slowdown and growing financial crush; the uneasy stability we have found this month is almost certainly heavily rooted in expectations for further stimulus from the Fed and other authorities.

That brings us to the scenarios that the market sees for the Fed. The most probable outcome is that after the two day meeting, Chairman Ben Bernanke will announce changes to the composition of the balance sheet. This is the option that many equate to ‘Operation Twist’ – a program implemented in the 1960’s aimed at flattening the yield curve (or in layman’s terms, to reduce the longer-dated interest rates). Considering lower rates on short-term loans is more relevant for banks and lower rates further out is more appropriate for consumers, this effort would be more tailored to driving growth. Though, whether the effort would be effective or not is another matter altogether. It is very likely that the broader market believes this effort is already a done deal. Therefore, we can reasonably assume that a lot of its good-will influence is already priced in. Furthermore, this program doesn’t materially improve the short-term liquidity situation. As the European crisis crosses the boarders, a bank crunch may lead to pain up and down the yield curve.

For a more hawkish alternative, the Fed could possibly announce an outright purchasing program to supplement its current holdings. This would reasonably be called a QE3 move; and it would most likely lead to an immediate surge in capital markets and tumble for the dollar. This doesn’t necessarily come as a sign of confidence in the capital markets; but more likely as an effort to get in front of the Fed’s buying to take advantage of the appreciation. It is very likely that regular market participants would reverse their positions immediately after the central bank finished or even before.

Finally, we have the bearish scenario: the central bank announces that it will let the market take its natural course and will not further intervene. Recognizing that previous iterations have met limited success and the moral hazard aspect only temporarily boosts capital markets so that they drop from higher levels means this is not an unreasonable consideration. That said, if this is Fed’s course, expect capital markets to drop off immediately and the US dollar to find strength in the limited manipulation and demand for liquidity. – JK