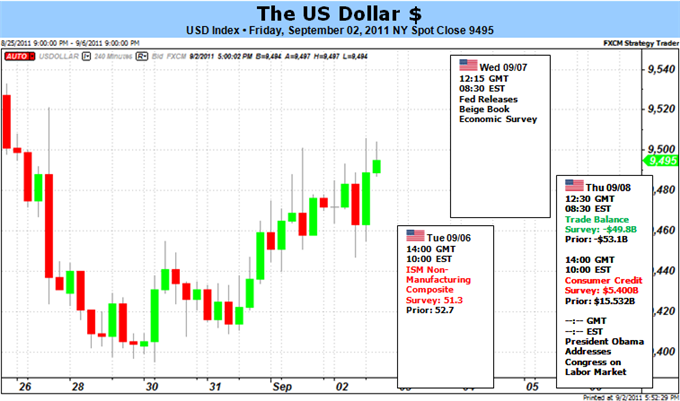 US Dollar Rallies Despite Dismal Labor Data – What Happens Next?

US Dollar Rallies Despite Dismal Labor Data – What Happens Next?

The US Dollar (ticker: USDOLLAR) finished at multi-week highs against the Euro on a potentially pivotal week of price action, setting the stage for further rallies into the first week of post-summer trading. A dismal US Nonfarm Payrolls report should have theoretically sunk the Greenback against major counterparts. Yet a 250+ point decline in the Dow Jones Industrial Average sparked safe-haven demand for the US currency. The coming week could provide similarly eventful price action for the dollar on key central bank interest rate decisions across the G10 group of economies.

Disappointing US economic data sets the stage for similarly lackluster results in upcoming releases, but the real forex market focus will be outside of the US with several key central bank rate announcements on tap. Main highlights will include the European Central Bank, Bank of England, Reserve Bank of Australia, Bank of Canada, and Bank of Japan monetary policy announcements. With the exception of the RBA, markets predict a zero percent chance that any of these central banks will move interest rates. Yet that does not rule out significant forex market volatility; any shift in guidance on future interest rate changes could force major moves across US Dollar pairs.

Volatility seems especially likely surrounding a contentious Reserve Bank of Australia interest rate decision. RBA officials previously surprised markets by striking a surprisingly dovish tone on growth and inflation prospects. Overnight Index Swaps now price in a 25 percent chance that the RBA will cut interest rates for the first time since the tail-end of the financial crisis. This is significant not only for Australia, but it could signal that a stalwart of the global economic recovery is fading in strength. The Aussie dollar has boasted some of the best fundamental prospects and the highest interest rate of any G10 currency for quite some time. The fact that markets now predict it will cut rates by over 100 basis points over the coming 12 months cannot be overlooked.

Where this leaves the US Dollar is admittedly unclear. On the one hand, dismal economic data and a serious stumble in economic recovery is plainly evident in the world’s largest economy. On the other, the Greenback should theoretically do well in times of economic uncertainty and broader financial market risks. We saw signs of the latter as the Dow Jones FXCM Dollar Index rallied despite a sharply disappointing NFP result. Yet further US Federal Reserve quantitative easing measures (QE3) seem a foregone conclusion on lackluster employment growth, and the risks to the Greenback are clear.

Financial market sentiment barometers in the S&P 500 and Dow Jones Industrial Average will likely have the final say in US Dollar price action. The Euro/US Dollar pair closed below a rising trendline dating back to July’s multi-month low as the Dow and S&P tumbled. Further stock market losses could lead to further EURUSD declines, but the past several months of frustratingly choppy EURUSD price action warns against chasing weakness.

Keep an eye out for key central bank interest rate decisions, as these could ultimately decide the fate of US Dollar pairs. Greenback traders should likewise keep track of surprises in US ISM Services results and a late-week Presidential address on Federal job policies. - DR