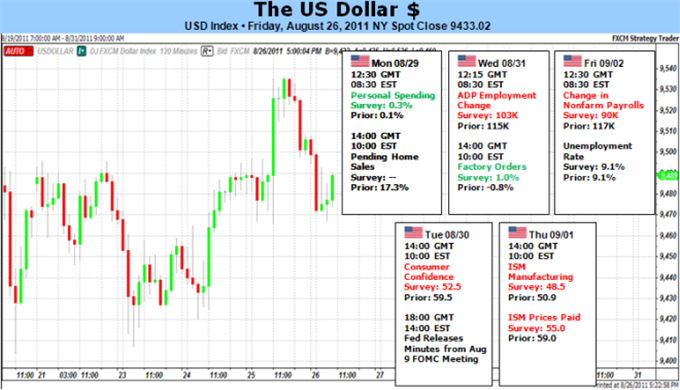 There was tremendous build up to the opening statement at the Jackson Hole symposium by Fed Chairman Ben Bernanke this past week; but the market was ultimately let down. This wasn’t disappointment in terms of direction (risk trends were actually modestly positive) but rather a disappointment for developing a clear direction for the markets and sentiment. Over the past months, congestion has been an all too frequent result after the development of meaningful event risk or release of important data. This can certainly buy time for policy officials to maneuver; but eventually, short-fixes will lead markets to collapse under their own weight – rendering policy officials’ influence severely weakened (much like with the situation back in the beginning of August). For the US dollar, that threat of volatility and speculative unwind is encouraging; yet we need to be patient for that scenario to gain traction.

Our first concern going forward will be the Fed stimulus prospects. Any effort to further boost the central bank’s relief effort going forward is a boon for not for just the US, but the global financial markets. The Symposium continues through the weekend; but Bernanke has likely spoken his peace on the subject. His suggestion that the Fed has a ‘range of tools’ yet available to fight further economic / financial troubles and that the September FOMC meeting would be extended to two days (the 20th and 21st) raises the specter that a deeper stimulus discussion will be held. Outright expansion is unlikely unless conditions have meaningfully deteriorated by the time they gather; but restructuring their balance sheet to assets with longer maturity or under liquidity restraints is probable. For dollar traders, we need to be more concerned with whether this would translate into a scenario where the dollar is naturally devalued or if it is just a sentiment booster. At present, skepticism reins; so neither is likely.

That said, a lot can change in a month’s time. Policy officials are likely hoping that this ambiguity with their approach will buy peace in the capital markets; but conditions are still very fragile. An immediate concern for the global (and thereby US) markets are the troubles in the European financial system. In the week ahead, EU, ECB and IMF officials will comb Greece’s books to see whether they have met targets to receive their sixth tranche of aid. Expectations are that they have fallen short. Further troubling is the fact that the country may have to scrap its private bond swap participation and Finland is threatening to withdrawal support of the second bailout if it can’t find collateral.

Europe seems to be more at the core of current worldwide lending issues this time around; so it stands to reason that policymakers recognize the broader implications and perhaps the necessity of greater efforts to prevent crises. The possibility of a coordinated policy effort is exceptionally high in the near future especially as different regions’ banking sectors come under increased pressure and near liquidity troubles on the level last seen during the Great Recession.

With the broader thematic uncertainties that the dollar faces (and potentially downtime if the Fed successfully confused the market to hold stable), where does scheduled event risk fit into the picture. We have a number of releases over the coming week, but at the top of the list is the August NFPs figure. The short-term, ‘shock’ value of this report is significantly diminished; but that actually leverages its use as a key growth indicator. That said, given the drop in confidence from consumer to business to investor, further evidence that the economy is slowing could induce another risk aversion relapse. –JK