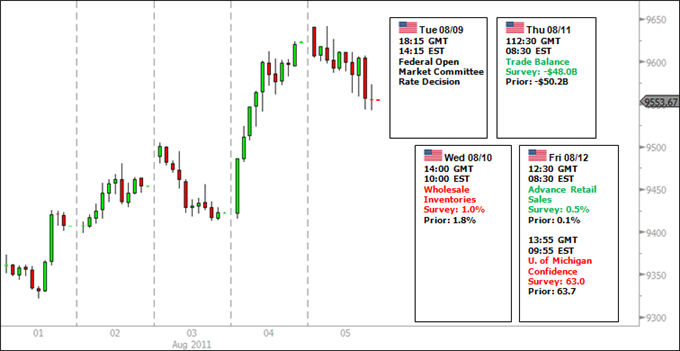 There is no denying the collapse in sentiment that befell the capital market’s this past week; but there was clearly enough doubt to deny the dollar its dues as a safe haven. Where the S&P 500 is effectively a reflection of investor sentiment (people will buy in when confident of the economy and markets or sell when panicked); the US dollar’s is a more complicated animal. Exposure to the world’s largest economy and market requires dealing with its currency; and it is just as easy to short the currency as it is to go long. That said, we have seen the long-term shift in reserve status, the slowdown in growth, the aggressive stimulus, the threat of an eventual downgrade and the looming possibility of QE3 adoption drain the greenback of most of its positive attributes. What this means is that there is essentially one redeeming feature for the US dollar: its liquidity. This is not particularly helpful in reviving the dollar; but it does make analyzing it easier.

Looking out over the coming week; risk trends will certainly act as the prevailing fundamental wind for the capital and FX markets. Yet, its influence over the dollar will be choppy at best. Through the past week, the S&P 500 suffered its worst weekly tumble since the Sub-Prime Financial Crisis. Yet, for the currency’s part, the Dow Jones FXCM Dollar Index only managed a 2.1 percent advance after touching a recent record low. In fact, outside of the high-yielding majors; the dollar was little moved. Should we expect anything different through the coming week? If the unwinding of risky positions continues, the dollar will not necessarily post gains against fellow ‘safe havens’ (Japanese yen, Swiss franc) nor with the core European currencies (Euro, British pound). To genuinely encourage investors to move into the US dollar; we need fear that market stability is in jeopardy.

When referring to market functioning, we are not referring to direction. Given the slowdown in the US economy and the wavering on further stimulus (more stimulus would help the speculative contingent in capital markets but also devalue those assets priced in dollars), the market can easily point to more attractive alternatives than the greenback even when seeking safety. Instead, to really leverage the appeal of the dollar, we need to play to its indisputable quality: liquidity. When short-term credit dries up, markets start to see gapping prices and efforts to unwind positions becomes panicked; the market starts to value liquidity above anything else. For reference we can look back to 4Q 2008 when Bear Stearns and Lehman Brothers succumbed to the receding tide of capital and the dollar (representing US Treasuries and money markets) found the benefit. Over the past few weeks, we have seen a few of the symptoms of financial crisis; but it has not yet taken hold – hence the dollar’s lack of follow through. If we see volatility stoked and credit markets freeze, this will change. And, the most immediate threat of such a threat at this point comes through the ongoing Euro Zone sovereign funding crisis.

On the other hand, the dollar will have an additional risk to handle: the possibility that US policy officials will adopt another round of stimulus to curb the pain the markets are feeling. In the past week, we have seen the ECB revive its bond purchasing program, the BoJ increase its asset purchase program by 10 trillion yen and the SNB cut rates and flood the system with francs. What can the US authorities do? Further government stimulus would be extremely difficult to accomplish push forward given the hard fought budget deficit deal and threat of a downgrade. Yet, the Fed could still increase its purchases of assets to offer assistance. Whether QE3 is an effective answer or not is debatable (probably not given QE2’s performance); but it is a lingering possibility. The market is sharply tuned to any hint of further stimulus; and so the Fed rate decision on Tuesday will be closely watched as will the Jackson Hole meeting two weeks later. - JK