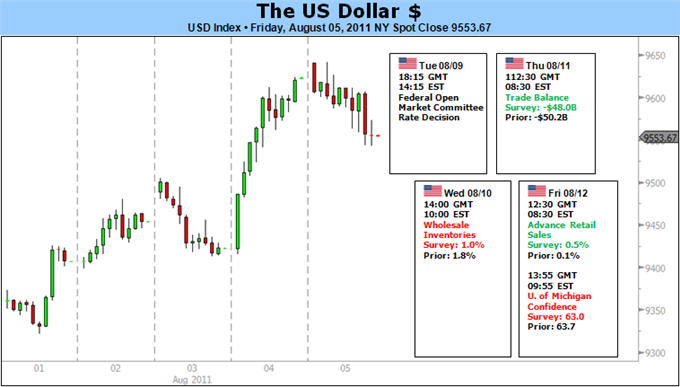 The term ‘new normal’ usually references a general shift in accepted expectations for an economy. However, we can apply this to currencies as well. And, we are certainly looking at a new normal when it comes to the expectations and outlook for the US dollar. Through the past week, the greenback was struggling to gain traction despite a building wave of risk aversion that sent the benchmark S&P 500 tumbling into its worst dive since the Great Recession back in the end of 2008. This hesitance spoke to the currency’s loss of status as the market’s undisputed safe haven asset and its increasing dependence on its role as a last resort liquidity provider. That complicated the picture for next week; but not as much as what we now face after the afterhours downgrade of the US credit rating by Standard & Poor’s.

The downgrade of the world’s largest economy is not necessarily that big of a surprise. Though the Moody’s and Fitch reaffirmed the United States top credit rating this past Tuesday after the government rushed through a last-minute debt reduction and deficit ceiling extension program; Standard & Poor’s hung back. This unwillingness to provide relief hung heavy over the market especially considering the group put the country on credit watch with negative implications (suggestion a 50/50 chance of a downgrade with 90 days) back on July 14th. Nevertheless, the implications this move holds are vast. In virtually all pricing models for derivative assets (and even many spot markets), the US Treasury rate is used as the ‘risk free’ rate. This is an academic norm that carries very real-world circumstances. This change means that pricing is now up for debate. Pushing further down the rabbit hole, the US government debt is the world’s primary reserve asset – meaning it creates the bulk of holdings for most central banks, sovereign wealth funds, private funds, banks, corporations and wealthy individuals’ portfolios. There could be a serious effort to lighten the load of Treasuries moving forward.

In this equation, there are two immediate concerns. First, there is the possibility of forced liquidation. Many of the largest holders of Treasuries have mandates that state that they cannot hold anything with less than an equivalent AAA rating. And, while many managers were scrambling to find waivers to circumvent this consideration (it will be nearly impossible to safely switch into equivalent holdings); there will inevitably be a contingent that can’t avoid it. The more troublesome consideration is the speculative reverberations. If the market is panicked into believing there will be a mass unwinding of Treasury exposure come next week – it will play out as a self fulfilling prophecy as market participants scramble to get ahead of the wave.

Over the longer-term, a gradual shift away from the dollar and Treasuries is certain as this has been an objective and effort for much of the world over the past decade. This development will simply accelerate the process. However, in the medium-term, the market faces the reality that there are no immediate equivalents to Treasuries. They are still the most liquid market; and one step off of a AAA rating is still exceptional. What’s more, they will be faced by an immediate paradox as risk aversion is already in full swing and will likely worsen.

Sentiment trends are the critical unknown in this equation. Given the panic that isolated financial problems are turning into a global crisis; the demand for safety leverages the need for safety and severely limits the options for what can offer shelter. And, just to make sure that things are too easy to interpret; we also have to account for the possibility that the Fed is forced to take on QE3. More on this as it develops. - JK