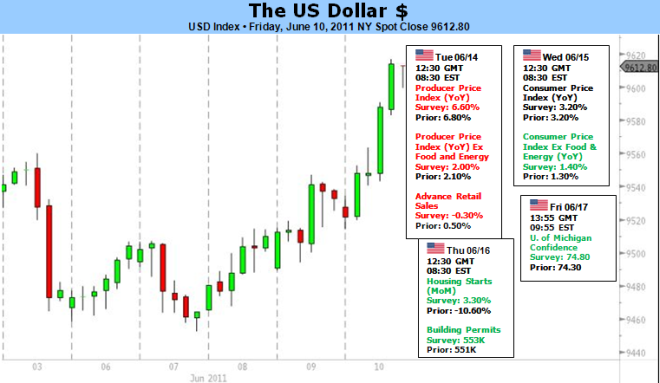 With its strong run into the end of this past week, it would seem that the US dollar is accelerating into an enduring bull trend. Yet, if we tried to pinpoint the source to this run, it becomes a little difficult to justify the climb. Risk appetite trends, US interest rate expectations, reversed stimulus conditions – none of these potential drivers is currently showing remarkable traction in the market. If they were, we would see a more concerted shift in capital across the financial markets and substantial tightening of cross-market correlations. So, if the fuel for a run is sputtering; where does that leave the greenback? Either one of the underlying catalysts will step in to support the climb or the currency’s advance will soon sputter. The question we should really be asking is when will fundamentals offer their support?

The most tangible catalyst that can lift the dollar through the coming week is a significant shift in investor sentiment. This was arguably the primary source of the currency’s strength this past week as the S&P 500 extended its worst string of losses through this past Wednesday since 2009. That said, fear has not taken over. This benchmark index’s descent is still rather controlled as market participants are not yet rushing for the exits. Certainly we have yet to make a true break lower on the Asian (Nikkei 225 below 9,320) and European (DAX 30 below 7,000) anchors. Moving forward, the sense of imbalance between high prices and slowing growth/returns is there; but we need a clear spark that can ignite a flame of panic that sweeps through the markets.

It seems like the European financial troubles have tempted the balance of risk and reward for some time now; but the issue will simply not catch. Nonetheless, we cannot ignore the clear issues this causes for one of the largest collective economies in the world – and the ripples a genuine crisis in the region could cause for the rest of the globe. Should the masses come to realize we have long ago passed the point of a clean recovery with this sovereign and private funding issue; the momentum that carried capital markets higher will reverse and carry us much lower. In the meantime, the localized troubles the region faces have proven enough to undermine the strength of the euro itself. This in itself offers a boost to the US dollar. The EURUSD exchange rate sees the most transactions on a daily basis by a wide margin; such that a significant move for one of the components can lead to the converse performance from the other.

There are other considerations in addition to those listed above that can drive the dollar (like relative growth and ongoing debate as to the dollar’s reserve status among others); but the greatest potential for a medium-term drive from the greenback rests in its rates. This does not mean specifically that the benchmark lending rate needs to rise for the dollar to find its balance (though a hawkish turn here would certainly change the landscape). Rather, a rise in market-derived rates is critical. Speculation is certainly an element here as with any other financial instrument; but investors will refrain from unwinding the positions they have established through cheap US funding (made so by the exceptionally low rates the Fed has set and the abundance of funds through stimulus programs) until the last moment. Rates (Treasury, Libor, money market) are at recent record or all-time lows waiting for the expiration of QE2 due at the end of the month. Yet, will the market start to doubt the existence of QE3 after the current program ends or speculate beforehand like back in September?– JK