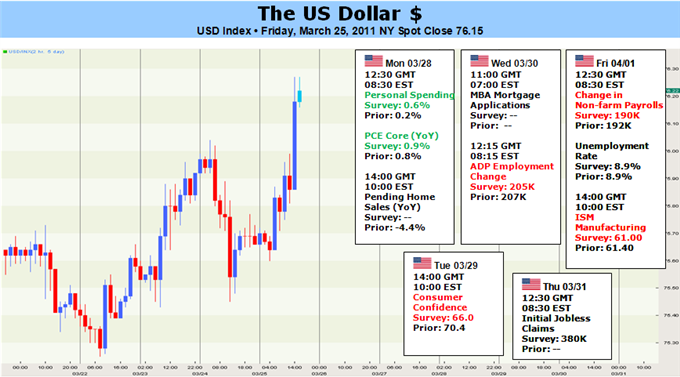 US Dollar: Nonfarm Payrolls to Set Tone for April in Pivotal Week for FX

US Dollar: Nonfarm Payrolls to Set Tone for April in Pivotal Week for FX

The US Dollar finished the week roughly unchanged against major counterparts, holding key lows against the Euro despite impressive gains in the US S&P 500 and broader risk sentiment. Ongoing fiscal solvency worries kept the Euro/US Dollar currency pair contained, and the US Dollar Index subsequently managed to recover from a fresh four-month trough. Traders now look to a potentially pivotal US Nonfarm Payrolls report in the week ahead. Whether or not the US Dollar posts a more meaningful recovery may depend on the domestic jobs report and fresh developments from European sovereign debt crises.

A strong February Nonfarm Payrolls report sets the bar high for March results, and material disappointments could further compound fundamental fears for the US Dollar. Current consensus forecasts call for the best Nonfarm Payrolls change since the spike seen in May, 2010—arguably leaving risks to the downside on such lofty expectations. Uncertainty surrounding the result will likewise be higher than usual; the April 1 release date means we will not see same-month ISM Manufacturing and Services Employment indices ahead of the release. FX Options markets show that 1-week volatility expectations have jumped ahead of NFP week, and traders should likely remain on the defensive amidst risk of significant US Dollar exchange rate moves in the days ahead.

The US Dollar Index recently broke below a three-year upward-sloping trendline, but market indecision has left the Greenback within a consolidative range since said breakdown. One gets the sense that the US Dollar will need a strong catalyst to stage a meaningful recovery against the Euro, Australian Dollar, and other resurgent counterparts. Initial signs of turnaround in the S&P 500 through mid-month led to noteworthy gains in the safe-haven US currency and improved hopes for a USD bottom. Yet the closely-followed S&P Volatility Index (VIX) recently saw one of its largest single-week declines in history and marked a significant turn lower in financial market tensions.

CFTC Commitment of Traders data shows that Non-commercial traders remain their most heavily net-short the US Dollar against the Euro since the pair traded near 1.50 in late 2007. Such one-sided leveraged bets warn that a deleveraging across financial markets could lead to a significant short-covering rally in the beleaguered US currency. Yet the timing of any such reversal has eluded us for some time now, and it is difficult to claim that an important S&P 500 reversal is likely when the VIX trades towards the low end of its historical range.

In the absence of a significant rise in financial market tensions, the US Dollar seems likely to continue lower against the high-flying Australian Dollar and other key counterparts. Yet risks of reversal remain high on one-sided positioning, and we cannot advocate aggressive US Dollar short positions amidst said risks. Important economic data will hopefully clear up some market indecision and lead to a more meaningful directional move in the Euro/US Dollar amidst recent consolidation. - DR