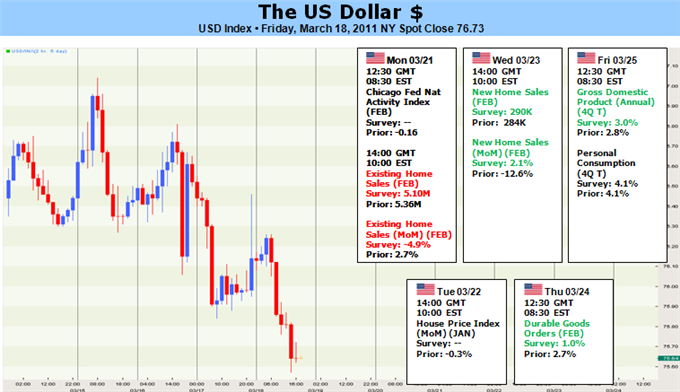 US Dollar: Why is the Currency at 2009 Lows With Risk Aversion Rising?

US Dollar: Why is the Currency at 2009 Lows With Risk Aversion Rising?

The US dollar did not end this past week in a good position. In fact, the trade-weighted dollar index actually broke a blatant three-year rising trendline and subsequently closed at its lowest levels since December 2009. Looking at the trend from the greenback alone over the past two months, this development may not seem so surprising. However, when we line this progress up against the fundamental developments over the past week; this breakdown comes as something of a shock. Why is the traditionally safe haven greenback falling when there was a meaningful tumble in investor sentiment this past week? There are two considerations here. On the one hand, this could speak to another phase of the currency’s fall from favor in currency circles. Alternatively, this could also be a reflection of very unique and otherwise temporary fundamental developments. Regardless, determining the dollar’s performance to this point is critical to understanding what direction it takes going forward.

First, we should start with the pessimist’s view. An uncomplicated assessment of the dollar’s slide to new lows is fitting to many traders and analysts as the greenback has been steadily losing its dominance as the world’s reserve currency and it will continue to do so through the future. That said, have expectations for the dollar really collapsed to the point that its liquidity is no longer a point of safety for the international investors looking to avoid a global liquidity crisis? Unlikely. Sure the dollar is losing its place as the most traded currency and its potential for return is in a word ‘lackluster’; but the need for liquidity during panics rises above such speculation. What’s more, the fact that a considerable amount of US capital founded or otherwise supported by Fed stimulus was invested outside the nation’s markets means there is a wave of funds that can lift the dollar through repatriation or risk aversion.

So, if the dollar is still a viable risk aversion currency, why is the currency still falling off while benchmarks for investor sentiment like the S&P 500 pitch into a meaningful reversal? This can be partially attributed to how we are analyzing its health. The Dollar Index by its very composition is primarily a reflection of EURUSD (the most liquid currency pair in the FX market by far) and USDJPY. Yet, with both of these, we have very unique fundamental considerations. For the yen-based cross, the situation is very unusual. The devastating earthquake Japan suffered on March 11th has contributed to uncertainty on a global scale; but it has also encouraged a carry unwinding and a repatriation effort. These drivers will hold wind for only so long however; and the multilateral intervention effort to boost USDJPY from the G7 certainly will help. The strength of the EURUSD advance is similarly dubious. The ECB has sounded the alarm that a rate hike could be on the slate for next month – which has blinded speculators. On the other hand, it is very unlikely this will lead to a series of hikes and furthermore Europe is facing a very real threat to its financial stability thanks to underlying sovereign credit issues.

Risk appetite anomalies can take considerable time to reconcile; so in the meantime, we need to watch timely developments. For guidance on exogenous influence; we need to watch the S&P 500, the EU summit on Thursday and Friday, the UK CPI figures on Tuesday and the situation with the Japanese Fukushima nuclear plant. Domestically, we have notable indicators like durable goods and the Chicago Fed National Activity Index. That said, Fed commentary could prove far more influential for hyper-sensitive rate speculation.