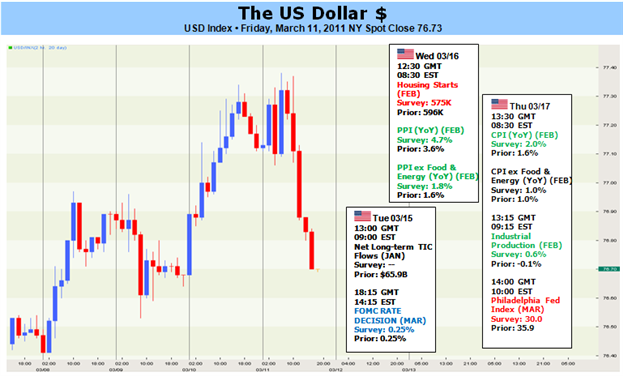 US Dollar: Start of a Reversal or Minor Bump in Broader Downtrend?

US Dollar: Start of a Reversal or Minor Bump in Broader Downtrend?

The US Dollar finally showed signs of life through the past week of trading, initially bouncing noticeably against the Euro and other currencies before pulling back into Friday’s close. Surprisingly large end-of-week declines dashed hopes that the dollar would carry bullish momentum into the weekend. Yet hope is far from lost for US Dollar bulls; a hold of recent lows against the Euro could keep an overall Greenback recovery on track. Markets now look to the coming week’s US Federal Open Market Committee meeting as top event risk for the beleaguered domestic currency.

Interest rate traders and analysts unanimously predict that the US Federal Open Market committee will leave interest rates unchanged through their upcoming rate announcement, but that does not rule out post-event volatility. It is admittedly unlikely that the FOMC will make any substantive shifts in its post-decision commentary. Core Consumer Price Index inflation remains relatively tame, and it seems improbable that the Fed makes a hawkish shift on price pressures through the foreseeable future. Strong February employment numbers likewise make it less likely that central bankers will take a more dovish shift towards broader economic conditions. Of course, such muted expectations suggest that any surprises could prove especially market moving across US dollar currency pairs. It is difficult to predict exactly how the dollar may react ahead of the event. Market hesitation suggests the coming week could nonetheless prove pivotal for the US currency.

Recent CFTC Commitment of Traders data shows that speculative traders remain heavily short the USD against a broad range of counterparts. Net positioning is at its most net-long the Euro against the US Dollar since the pair traded near the 1.45 mark in December, 2007. And though one-sided sentiment is hardly a guarantee that an asset price will reverse course, any signs of material breakdown would likely involve rapid US Dollar short covering and continued corrections. The past week’s sharp US Dollar rallies initially suggested that the US Dollar could recover from a bearish sentiment extreme. Yet short-term outlook has become considerably less clear given Friday’s sharp Greenback declines.

It remains as important as ever to watch how the US Dollar starts the coming week of trading. Can it continue its earlier move higher against all major counterparts, or is Friday’s sudden sell-off the sign that the USD bounce was a momentary blip? We have made little secret of our US Dollar-bullish bias for some time now, and indeed many of our analysts called for continued strength on earlier-week reversals. A key factor to watch is whether the Euro/US Dollar holds recent highs. If the US Dollar is able to hold significant lows, a short-covering-based rally becomes that much more likely.