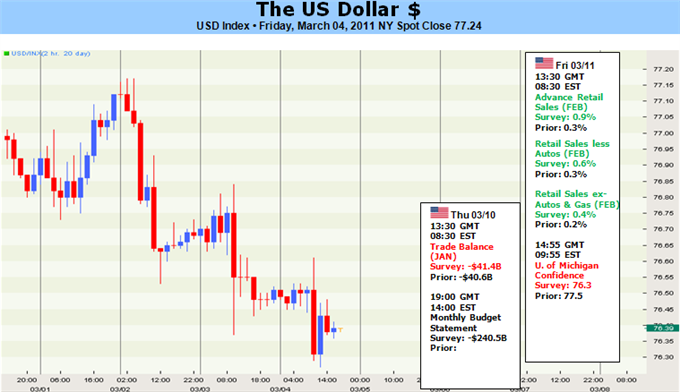 US Dollar: More Potential in Risk Trends and Rates than You May Expect

US Dollar: More Potential in Risk Trends and Rates than You May Expect

Nothing seems to be going the dollar’s way. The deficit continues to balloon, evidence of a robust economic recovery is taking too long to materialize, the global interest rate outlook is quickly outpacing the Fed and risk appetite trends remain stubbornly buoyant. Yet, these considerations have different levels of influence over the FX market. What’s more, a few of these meaningful drivers may actually be close to filling in a fundamental void for the greenback that in turn provides the right kind of argument for buying into a drastically oversold security. Ultimately, the question is not ‘if’ the dollar will recover lost ground but rather ‘when.’ In the week ahead, we need to keep to keep a close eye on the standard measures for any investment: risk and return.

When it comes to valuing a currency, the potential for returns can be measured in either capital gains or yield income. And, this strength generally originates in economic health. In the recovery rankings, the US may not be showing the most aggressive revival; but its progress is steady and starting to show roots in the critical areas of the economy. Point-in-case was this past week’s data. The ISM factory activity report advanced to a six-year high while the service sector equivalent hit a five year high. More importantly, net private payrolls advanced to 220,000 positions (the second biggest increase in five years) and the unemployment rate has dropped to a 20-month low 8.9 percent. And while the participation rate is still at a record low and wage growth did slow on an annual basis, the underemployment rate showed a meaningful improvement (to 15.9 percent), suggesting that labor growth is genuinely improving.

Yet, when it comes to price action, a slow and steady recovery is not what the markets immediately react to. Instead, speculation is what carries immediate trends and volatility. On that front, the dollar is still struggling. The ECB last week raised the stakes further when President Trichet suggested the group was ready to hike as soon as the April meeting. What’s more, expectations are still exceptionally high for the pound’s benchmark rate and the BoE is scheduled to meet on Thursday. There is little doubt that these two central banks are further ahead of the curve than the Fed is. On the other hand, the market has made sure to fully price in that belief. And, in the effort to boost these European banks, the dollar has been put under greater pressure a laggard. Yet, the possible end for the US expansionary policy program may be in sight. Already, debate has emerged over whether the QE2 program will be ended abruptly, it could be cut short, when we can mark the end of that program and the beginning of the stimulus withdrawal. Speculation on these developments begin very earlier; so it is worth watching Fed chatter this week and also keep a tentative eye on competitive rate potential (the BoE decision).

The more immediate and chronic potential catalyst for the dollar is the bearing on group risk appetite trends. The ECB hawkish turn was a well timed buffer to the ongoing turmoil in the Middle East. That said, the fundamental pressure doesn’t look like it will let up anytime soon. What’s more, the upcoming EU summit could sabotage the region that is now considered the foundation for yield-expectations. We have seen a number of fundamental concerns develop in the background; but the hazard has been ignored in favor of squeezing whatever return is left in an already mature capital market trend. Eventually confidence will give; and it will be sentiment that cannibalizes itself.