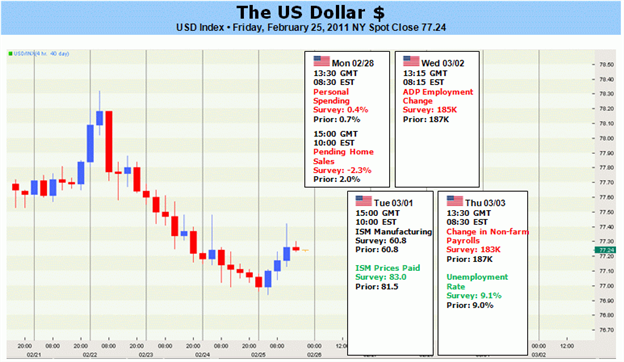 The US Dollar finished the week lower against almost all G10 counterparts, continuing its multi-month downtrend ahead of a critical week of economic event risk. A fairly disappointing revision to Q4 GDP capped a week of mixed data, and all eyes now turn to the coming week’s critical US Nonfarm Payrolls report. The NFPs release needs little introduction as one of the most market-moving reports across global financial markets, and February’s result will be particularly significant given January’s sharply below-forecast jobs figure.

A busy week of economic event risk will shape expectations and likely force sharp short-term moves ahead of the NFP release, and it will be critical to monitor financial market moves as the US Dollar nears significant lows against major counterparts. Consensus forecasts currently call for a respectable 190k jobs gain through the month of February—consistent with expectations of substantial improvements on January’s clear disappointment. We will watch earlier-week ISM Manufacturing, ADP Employment Change, Initial Jobless Claims, and ISM Services results to gauge the likelihood that February payrolls meet lofty forecasts. Uncertainty surrounding the future of US Federal Reserve monetary policy puts all eyes on whether a broader economic recovery will be enough to produce similar improvements in the domestic labor market.

The US Federal Reserve shows little urgency in withdrawing extraordinary monetary policy stimulus amidst generally weak inflation and lackluster jobs growth. Controversial Quantitative Easing measures have been a major driving force behind US Dollar weakness, and it could arguably take a substantial shift in the Fed’s stance and rhetoric to force a sustained Greenback recovery. In the absence of such a change, the US Dollar may need a broader shift in financial markets to drive a major reversal.

The S&P 500 saw a sharp pullback on a broader flight to safety on geopolitical turmoil in the Middle East, and the USD rallied as one of the world’s foremost safe-haven currencies. Yet a later bounce in stock markets suggests bulls have yet to give up the fight, and we may need to see a more sustained shift to make any serious argument for a market top (and US Dollar bottom). CFTC Commitment of Traders data shows that Non-Commercial traders (typically large speculators) remain heavily net-short the US currency on a steady downtrend. And though such one-sided sentiment typically occurs near major market turns, sentiment extremes are only clear in hindsight and extremely difficult to time.

Trend traders will likely favor continued US Dollar weakness into the week ahead, and it is difficult to make the case for a substantive turnaround absent a material improvement in USD sentiment. FX Options market risk reversals likewise suggest that many traders have continued to bet on and hedge against Greenback weakness. It would likely take a material improvement in US economic data or a similarly large turn lower in ‘risk’ to force a substantive USD bounce. Given that the first week of the month quite often sets the pace for subsequent trading, we will pay special attention to whether the US currency shows any real signs of recovery through March.