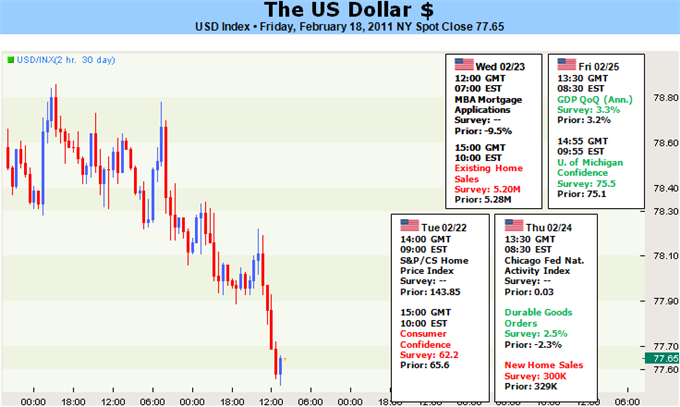 US Dollar Requires Continuous Support to Post a True Recovery

US Dollar Requires Continuous Support to Post a True Recovery

This past week was not a favorable one for the US dollar – though from a fundamental perspective, the developments would actually lay the ground work for timely rebound. In this performance, we see one of the primary reservations for the dollar to establish a true and lasting recovery: the absence of support from a critical fundamental driver. There are three prominent elements that can reasonably be expected to provide enough leverage for the greenback to truly lay into a rally. In order of how quickly they can reasonably be expected to spark a dramatic shift in the market, the three themes we need to keep an eye on are: the threat of a sharp drop in risk appetite and unwinding of yield-based positions; the inevitable switch to a hawkish interest rate regime; and relative outperformance in economic activity. Two of these interests have slowly started to firm up for the greenback recently; but progress has been limited. And, looking out over the coming week, there is nothing to project more meaningful progress. That said, the dollar could once again flounder in volatile but ultimately aimless congestion until speculation decides to alter course through one of these themes.

Running down the list of our major drivers, underlying investor sentiment may carry the greatest risk of volatility for the dollar and financial markets at large; but it is interest rate speculation that has the better chance at making perceptible progress. There is little doubt that the Federal Reserve will keep its benchmark lending rate near zero until the very end of the year or perhaps into the first quarter of 2011. However, that does not mean that rate expectations won’t come into the picture until then. If we are to stick to the timetable that has been laid out by policy officials, the second round, $600 billion quantitative easing program the Fed is pursuing will end in June. After that, given market conditions, the central bank will start to unwind its stimulus facilities. This isn’t exactly a rate hike; but it withdrawals so-call ‘hot’ capital from the market. This is a necessary processor to a rate hike and it has the further effect of stifling leveraged risk appetite – thereby reversing the flow of funds from cheap US loans to higher-yield assets abroad. What’s more, even before this inevitable move; the market will speculate and position ahead of the actual effort. And, with a June expiration on the program, we may have to wait a few more weeks before interest becomes serious (perhaps after European financial concerns clear the March summit). Yet, when capital markets are as stable and bloated as the S&P 500; speculation tends to enjoy a greater influence over direction.

Where does that leave relative growth expectations? Unlike risk trends and yield forecasts, this particular driver is always in the background. Economic forecasts have been developing for months; and with the first reading of 4Q GDP; it has raised the benchmark for activity levels. However; there is still a disconnect for expectations of truly robust performance. That gap is largely due to the high unemployment rate. As the backdrop for the labor market doesn’t change very quickly, the fundamental guidance this particular concern provides will be more nuanced. On that front, we have plenty of event risk in the week ahead. The February consumer confidence survey from the Conference Board will be particular interesting for its details on spending plans and the assessment of growth and employment trends. The durable goods figures and Chicago Fed’s national activity index for January will provide a timely read on the positive contributors to growth; while the housing statistics (price, new and existing home sales) could highlight an ongoing anchor.– JK