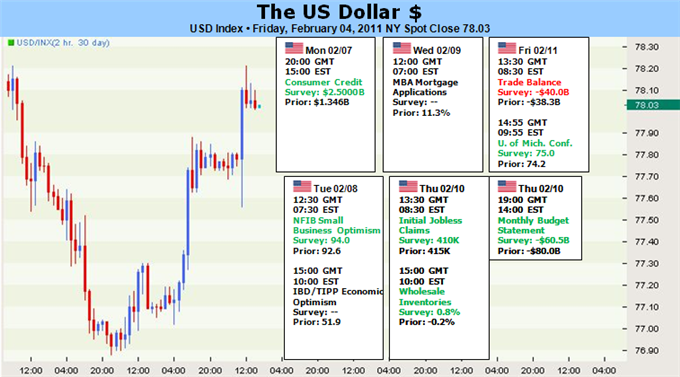 US Dollar Sees a Bounce but Fundamental Support is Lacking

US Dollar Sees a Bounce but Fundamental Support is Lacking

The dollar has come a long way in just a week’s time. Through the second half of this past week, the dollar was starting to find its footing in what looks to be a tentative recovery. Yet, doubt over whether this is a true, bullish reversal should be preserved considering we had similar speculative hopes dashed just a week before when a sharp rally for the dollar and the long-awaited channel break from the S&P 500 were subsequently reversed after the weekend. What led the greenback to gain ground this past week is what we need to establish. The deeper the fundamental roots to this effort, the more probable carry through will be on a true bull phase. That said, without a solid foundation, the benchmark currency could be up for another swift tumble.

Looking over the past week, the dollar could have drawn its strength from two particular sources: high-level event risk or risk appetite trends. The data flow was particularly interesting for its rounded look at the broader economy. A view of the consumer and business health offered a direct look into whether the US economy was on a fast track to surpass its global counterparts for growth and returns. Where personal spending, manufacturing activity and service sector activity all carved out gains; a vigilant fundamental trader would really hone in on the disappointing employment breakdown and the PCE-based inflation figures. Where the net payrolls were a disappointment for missing their mark; the jobless rate only improved with a record frustrated American’s leaving the labor force and the participation rate tumbling dot its lowest level in 26 years. This puts growth into perspective. Without employment and wages improving, the economy will not continue to expand at its current clip. And, as for the Fed’s favored inflation indicator, a record low sets a very poor precedence for interest rate speculation.

Data was not very encouraging last week; so perhaps the dollar took the initiative to capitalize on a risk aversion move. And yet, our benchmark for sentiment (the S&P 500) was still pushing two-and-a-half year highs. Going forward, it will be exceptionally difficult for the dollar to sustain – much less leverage – its burgeoning rally if sentiment does not start to deteriorate market-wide. There are just a few prominent catalysts that can meaningfully encourage the greenback higher at this point; and risk appetite trends is at the top of the list. An ideal situation for the safe haven currency would be an aggressive and correlated tumble in equities, corporate debt and speculative commodities along with a subsequent rally in gold, money markets and the funding currencies. One or two of these factors would present limited backing. As for the data on hand, don’t expect meaningful volatility to follow the releases. Consumer credit will take measure of lending conditions, the NFIB small business optimism will gauge hiring expectations for the largest employer group, the monthly budget will track the push to the deficit cap and the University of Michigan sentiment survey will gauge Americans’ willingness to spend. None of this though materially alters the US’s relative pace of growth, risk appetite trends or the timing for rate hikes.

And, though as traders, we should take stock of the immediate threats on our radar; it is also important to keep tabs on the longer-term developments. Concerns that will weigh more heavily in the not-so-distant future are the underperformance of domestic yields, the burden of a record deficit and the eventual withdrawal of stimulus. Just keep those concerns in mind. – JK