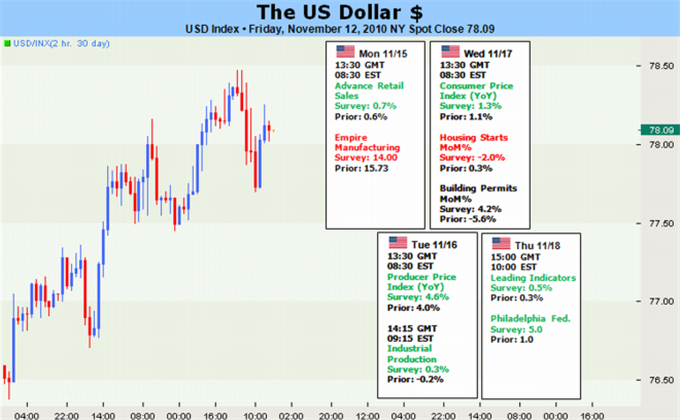 US Dollar Recovery can be Sparked by Risk Trends, G20, Euro Troubles

US Dollar Recovery can be Sparked by Risk Trends, G20, Euro Troubles

Fundamental Outlook for US Dollar: Bullish

After having set lows for the year at the very beginning of the month, the dollar has firmed its position considerably this past week. The sharp and recent rebound can easily be attributed to an overdue speculative correction as shorts take profit or perhaps from traders unwinding yield-based trades to meet increased margin requirements on particular assets (silver, agricultural commodities, Irish fixed income). However, given the fundamental developments that we have seen develop into the end of this past week and the evolution of potentially market-defining events going forward; there is a very real and tangible fundamental argument to be made for the dollar’s recovery going forward. A positive force in stoking dollar bids is absolutely essentially given the constant negative buoyancy that plagues the dollar through the Fed’ stimulus efforts and the long-term diversification away from the greenback as a reserve. Can this balance be tipped in the currency’s favor? Certainly.

There are a few primary fundamental themes that should be monitored very closely when trading the dollar. Discussing these drivers in order of urgency, we start with the revival of the European financial crisis. Back in May, the European Union had to act in conjunction with the IMF to bailout Greece; and the duo went on to create a standing European Financial Stability Facility (EFSF) that represented a 750 billion euro safety net. This intent of this fund was to eliminate market fears that any EU member was at risk of default. The only problem is that this promise of this last minute assistance is that it didn’t fixed the region’s standing financial problems. And, with officials in the better performing member economies calling for painful regulation when the many EU members were already failing to balance austerity measures with growth, the fundamental reality facing the region grew more obvious. We may have found the tipping point for Europe with Reuters this past Friday quoted unnamed Eurozone officials as stating the Ireland was drafting a call for aid from the EFSF. We will likely find out soon whether this call has been made; but what impact could it have on the dollar. From a technical standpoint, the dollar is the euro’s primary counterparts. That said, the risk implications will be far more influential.

The dollar’s status as a safe haven is well known. However, we should appreciate that its pure fundamental appeal as a global refuge has certainly diminished over time. With the Fed’s aggressive stimulus efforts and the constant – if measured – effort made by global authorities to diversify away from the dollar, the currency’s investment appeal has diminished. That said, should the alarm of crisis be sounded, these issues will be easily ignored. If equities, commodities and debt falter worldwide; US liquidity will look very appealing.

With sentiment trends set to ignite, the issue of capital flows would seem a moot point. However, in the past, we have still seen capital make its way from the US into China and other emerging markets under dour market conditions. That leak may be cut off going forward. Though the G20 didn’t deliver a commanding policy to curb the globes inequities, it did endorse curbs to speculative capital inflows for emerging markets. With investors unable to borrow cheap money in the US and invest it elsewhere, it will likely stay in the US. - JK