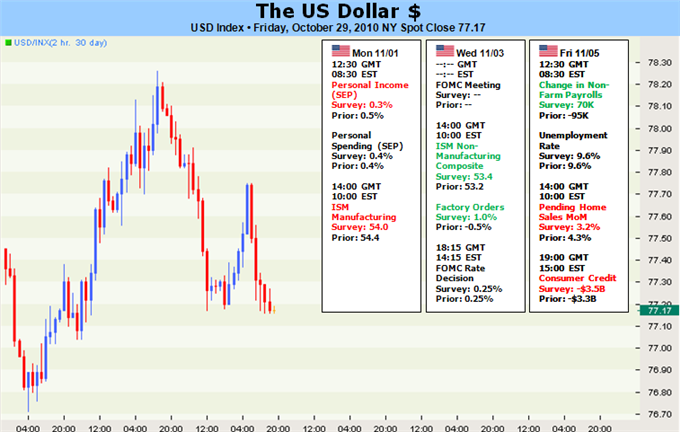 US Dollar, Risk Appetite Likely to Return to Trend On FOMC Decision

US Dollar, Risk Appetite Likely to Return to Trend On FOMC Decision

Fundamental Outlook for US Dollar: Neutral

Before delving into the fundamental possibilities for the dollar over the coming week; we should first reflect on the ‘neutral’ forecast I have levied against the currency. In fact, the currency is highly likely to catch a trend next week on the long-awaited announcement of the Federal Reserve’s monetary policy plans. However, the bearings that the dollar takes and the pace with which it is imbued can be highly variable depending on what policy officials agree to. If we were to have ‘activity level’ as an assessment, I would have set it to ‘extremely high’ and established the scenarios for direction from there. That said, if given a two-to-three week horizon and told to determine the most likely course for the dollar, my inclinations would lean more towards a significant recovery effort for the severely weakened currency.

In assessing the dollar’s future, there is little doubt that one event dominates the currency’s dance card. The Federal Open Market Committee (FOMC) is expected to deliberate on the economic and financial health of the US economy and announce what actions it will take come November 3rd at 18:15 GMT. Economists and the speculative market are already heavily favoring an increase in stimulus. ‘If’ is no longer the concern on this point. This facet has already been priced in. And, that said, if there is in fact no change to policy; the greenback will immediately reverse course as positioning to this point was made in the effort to price just such a scenario in. Following the lines of probability though, the more pivotal and debatable aspect of this event is the size and maturity (how long it scheduled to last) of a second asset purchasing program. Given the musings of a few policy officials, the consensus is for a more flexible program that comes in intervals of $100 billion injections over five or six months. That is our unofficial benchmark.

An interesting angle to this event was added just this past week when it was reported that the Federal Reserve Bank of New York polled its Primary Dealers (those banks that have to engage in open operations and bid on Treasuries) to see what they expected the size and maturity of a second stimulus plan would be. This is likely an effort to see what the market is expecting so as to understand what scenarios would disappoint, appease or somehow surprise the masses. With some dealers throwing in forecasts of $1 trillion, we have to wonder whether this is an effort to match the market’s expectations so as not to generate unwanted volatility. Only time will tell.

Now that we laid out the scenarios and background information, what will be the reaction? Considering the Fed does opt for an additional stimulus program, matching expectations may ultimately offer little for risk appetite and leave the greenback at fair value. Besting the $500-$600 billion consensus could very well weigh the dollar as it devalues the currency; but feeding risk appetite is another thing. The first program clearly did not work; and many believe the marginal utility of further support will diminish quickly. If that is the case, risk appetite is still highly likely to collapse in the not so distant future; and the dollar will in turn find a foothold to rally. - JK