A shocking set of PMI figures from the US to close out the week, with the composite reading showing an unexpected fall into contraction territory. What’s more, the surprising fact is that the soft report had been led by the services sectors. S&P Global noted that the downturn in output signalled a further loss of momentum across the economy of a degree not seen outside of COVID-19 lockdowns since 2009. The downturn was led by a steep drop in service sector activity, though production at manufacturers also fell marginally, down for the first time in over two years. Consequently, while hard data remains robust, the more timely soft data has heightened concerns over a recession that is possibly more than just a technical one. As such, unlike the conditioned view that bad news is good news for stocks because it increases the likelihood of easier monetary policy, now that the Fed is dealing with 40yr high inflation, bad data should be bad news for stocks.

Looking ahead to next week, the Federal Reserve is expected to raise rates by another 75bps. However, the focus will on Chair Powell’s press conference, particularly as the outlook becomes increasingly clouded amid the rising angst over an economic slowdown. Elsewhere, US earnings kick up a notch with updates from Alphabet, Apple, Amazon and Meta (Facebook).

Overall, my bias remains that we have seen a bear market rally since the low in June and ultimately the path of least resistance is lower.

Russian gas flows via Nord Stream 1 came back online to pre-maintenance levels of 40%, reducing investor concerns over a prolonged shutdown. However, the day after the ECB hiked interest rates by 50bps, the latest slew of PMIs fell into contraction territory, further highlighting the fine line that the ECB has to walk between fighting inflationary pressures and avoiding a hard landing. 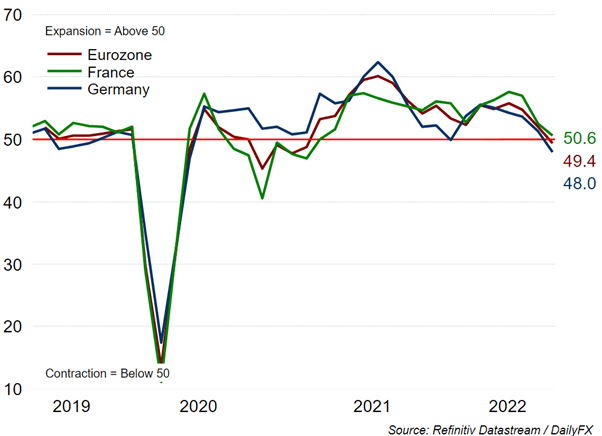 That said, despite the modest weekly gain in the DAX, sentiment remains fragile. Looking ahead, next week will see the release of German IFO, inflation and a first look Q2 Euro Zone GDP.