Economic growth expectations have softened considerably recently. China’s Q2 GDP data was the latest sign that headwinds to global growth are strengthening. The US consumer price index (CPI) for June recorded its highest print in more than 40 years. Markets began pricing in the possibility for the Fed to hike by a full percentage point later this month. Those bets were slashed moving into the weekend after several Fed officials tempered expectations.

A report from the University of Michigan showed that US consumer long-term inflation expectations fell in early July. That, along with a strong US retail sales report, allowed stocks to end the week on a high note, with the Dow Jones gaining 2.15% on Friday, nearly wiping out its weekly loss. Gold prices continued to slide into the weekend despite some softening in the US Dollar. Brent crude and WTI crude oil prices fell more than 5% amid the pickup in growth fears. A large gasoline inventory build reported by the EIA dragged demand expectations lower. The oil-linked Canadian Dollar fell. Canada's June inflation rate drops this week.

The US Dollar Index (DXY) hit its highest level since September 2002. The Japanese Yen fell nearly 2% against the US Dollar, holding its position as the worst performing major currency in 2022. The Bank of Japan is expected to keep its ultra-loose policy in place when it meets on Thursday, although we may see changes to inflation and growth forecasts. Policymakers have expressed concern over JPY weakness, and some believe the 140 level may trigger an intervention, but that is unlikely to come before the BoJ meeting in any case. Japan’s June inflation rate is also set to cross the wires.

The Euro was another big decliner against the USD, with EUR/USD briefly breaking parity. The European Central Bank (ECB) is expected to kick off its rate-hike cycle with a 25 basis-point hike Thursday. Europe’s inflation rate is well above the ECB’s target, and energy prices are seen rising later this year. Markets are pricing in a 50 bps rate hike for the ECB’s September meeting, although many believe they are already well behind the curve on tackling inflation.

Wheat prices crashed, falling more than 12% to the lowest level traded since February. Ukraine and Russia are reportedly close to signing a deal that would allow grain exports to resume. Wheat prices soared more than 40% from February to June after Russian forces blockaded Ukraine’s Black Sea ports. Still, the deal isn’t done, and volatile political tensions may railroad discussions.

Elsewhere, New Zealand’s second-quarter inflation data will kick off the week’s economic docket. Analysts see Q2 inflation rising to 7.1% from 6.9% on a year-over-year basis. Labor market and inflation data for the United Kingdom are due out. GBP/USD is trading near its 2020 lows. CFTC data showed that USD longs increased. 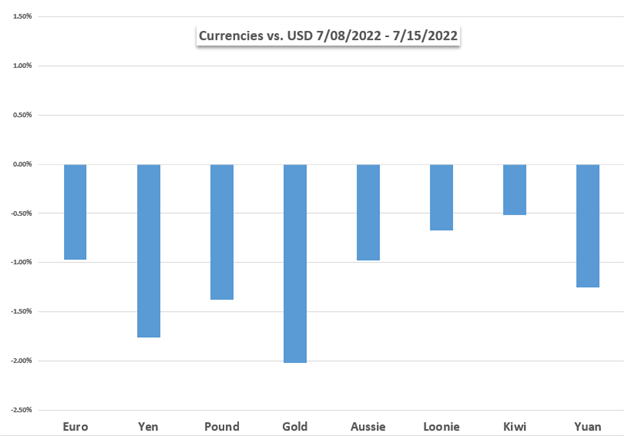 The Euro is facing a week full of high-risk events and the single currency is looking at the ECB for stability and guidance on Thursday. Expect further EUR/USD volatility.

The Canadian dollar has a big week ahead with Canadian inflation, a hawkish Fed and depressed crude oil prices dictating USD/CAD price action.

UK inflation and jobs data next week to follow from televised PM debates over the weekend.

Bitcoin (BTC/USD) Resilience Holds After Another Big Week For USD

Bitcoin, Ethereum and their alt coin counterparts have rebounded despite the shocking US CPI print dented sentiment further. BTC/USD remains above $20,000 despite fundamental risks.

The Reserve Bank of Australia (RBA) Minutes may do little to influence AUD/USD as the central bank appears to be on a preset course in normalizing monetary policy.

The Japanese Yen is vulnerable to external forces with the Bank of Japan still expected to be one of the few remaining dovish central banks. Is it all clear for USD/JPY to keep rising then?

Stocks are holding the July range but could be poised for further recovery within the yearly downtrend. Levels that matter on S&P 500, Nasdaq & Dow technical charts.

Gold prices have fallen by 10% while selling off for five consecutive weeks. Two-year lows lurk below, is there any hope for XAU bulls?