The price of oil has fallen roughly 20% from the 2022 high ($130.50) as US President Joe Biden takes further steps to combat high energy prices. Crude may face a further decline over the coming months as rising output is met with easing demand.

The Biden administration has called upon Congress to suspend the federal gas tax for the next 90 days while holding ‘emergency meetings’ with refiners in order to curb energy prices. Developments coming out of the US, the world’s largest consumer of oil, may continue to influence the price of crude as production approaches pre-pandemic levels.

Recent figures from the Energy Information Administration (EIA) show US production widening to 12,000K from 11,900K in the week ending June 3 to mark the highest reading since April 2020. It remains to be seen if the Organization of Petroleum Exporting Countries (OPEC) will respond to the development as the group announced that July production will be adjusted upward by 0.648 mb/d following the June 2 Ministerial Meeting.

However, the recent adjustment in OPEC output may end up being temporary as the organization increased production by 0.432 mb/d for most of 2022. A further rise in US supply may push OPEC to revert back to its previous schedule as the group acknowledges that “renewed activity is expected to lead into the summer holiday season of the northern hemisphere.” 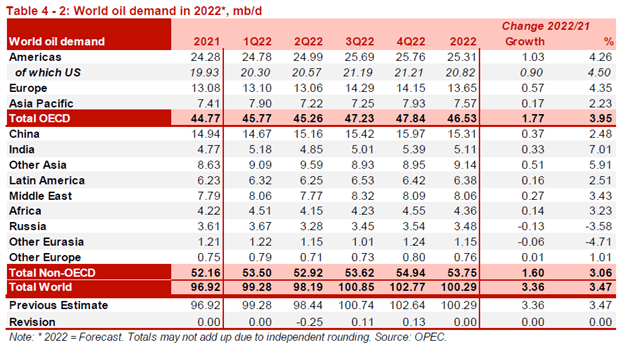 OPEC’s Monthly Oil Market Report (MOMR) for June states that “in 2022, oil demand growth remain unchanged at 3.4 mb/d.” The report goes on to say that “world oil demand is projected to average 100.29 mb/d, which is same as the previous month’s estimates.”

The report also forecasts that demand is expected to exceed 2019 by 0.09 mb/d. Signs of slowing US economy may encourage OPEC to throttle back production later this year as “current geopolitical developments and the uncertain roll-out of the pandemic toward the end of the second half of the year continue to pose a considerable risk to the forecast recovery to pre-pandemic levels.”

Efforts by the Biden administration along with the rise in US crude output may continue to drag on the price of oil. Crude may face a bear market over the coming months if the outlook for global demand deteriorates.