After a strong performance earlier this month, oil prices sold off violently this week, falling sharply along with risk assets including stocks. Heading into the long U.S. weekend (Juneteenth holiday observed on Monday), the West Texas Intermediate (WTI) benchmark was down more than 10% to $$107.7 per barrel for the entire week, its lowest level in nearly a month, weighed down by recession fears. The S&P 500, for its part, was on track to lose about 5% over the same period, though downside pressure abated Friday for the equity index.

Investors are growing increasingly worried that the Federal Reserve’s aggressive hiking cycle aimed at curbing inflation, which is running at the fastest pace since 1981, will lead the U.S. economy to a hard landing, a scenario that could significantly undermine demand for commodities.

This past Wednesday, the Federal Reserve raised borrowing costs by three-quarters of a percentage point to 1.50-1.75% and signaled that it will deliver another 150 basis points of tightening this year, a move that will push the federal funds rate above the neutral and into restrictive territory. Restrictive monetary policy at a time of slowing activity will become a further drag on gross domestic product (GDP), increasing the likelihood of a downturn in the world’s largest economy.

Despite rising growth headwinds, oil maintains a constructive outlook. For instance, even if energy consumption were to cool on the back of demand destruction, extremely tight markets and structural shortages should cap the downside.

Focusing on other catalysts, China is likely to ramp crude imports heading into the second half of the year as mobility improves following the recent COVID-19 induced lockdowns. In addition, Russian oil exports are likely to decline in the wake of the European Union phased-in embargo, further exacerbating supply and demand imbalances worldwide. It is true that President Putin's government may redirect energy flows to more friendly countries, such as India and China, but logistical constraints mean that some barrels will be displaced for good, at least in a near-term horizon.

For the reasons mentioned above, the weakness in oil seen in recent days may be temporary and overdone, suggesting that there could be a short-term rebound once the extreme fear dissipates and traders recalibrate their medium-term expectations.

Recommended by Diego Colman
How to Trade Oil
Get My Guide

After this week’s brutal sell-off, oil (WTI Futures) is hovering slightly above a major rising trendline extended off the December 2021 lows, now crossing the $106.50 area. In case of a test, this line, which has guided prices higher impeccably since late last year, may act as strong support, paving the way for a technical rebound in the near-term off of those levels. If the bullish reversal scenario plays out in the coming days, initial resistance appears around the 50-day simple moving average, followed by the $112.00 zone. On further strength, the focus shifts to $116.50.

On the flip side, if sellers maintain control of the market and WTI ultimately breaks below $106.50 in a decisive fashion, we could see a retreat towards $104.50, the 38.2% Fibonacci retracement of the December 2021/March 2022 rally. Should this floor be breached, selling activity could intensify, exposing the $96.50 area, the 50% Fib retracement of the move discussed before. 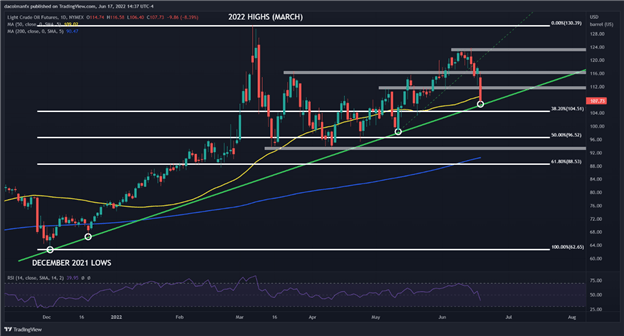