Volatility was back on the rise, with the VIX “fear gauge” up 11.85%. There were a couple of reasons why. The first was a more hawkish European Central Bank, which continued adding to the global monetary policy tightening narrative. Then the week wrapped up with unexpectedly higher inflation in the United States, raising the odds of a 75-basis point Fed rate hike in July.

The latter meant a solid week for the US Dollar, which outperformed every single G10 currency. It did the best against sentiment-linked ones, such as the Australian and New Zealand Dollars. The Greenback certainly enjoyed the benefit of rising yields, with the 2-year Treasury rate surging past 3% to its highest point since the depths of the 2008 Great Financial Crisis.

Gold prices managed to find some momentum despite a stronger US Dollar and surging bond yields, perhaps capitalizing as an inflation hedge. However, XAU/USD has generally been struggling to rise in an environment of 40-year high inflation. Crude oil prices were little changed, giving up some gains as tighter monetary policy bets worked to cool growth expectations.

All eyes next week are on central banks, with the Federal Reserve, Bank of England and Bank of Japan on tap. Friday’s market reaction suggests that the Fed has much more to do than what it has been laying out as it increasingly falls behind the curve of bringing inflation to target. That places the focus not on the 50-basis point hike seen, but on what its next step will be.

The BoE is seen raising rates by 25-basis points to 1.25% from 1%, with focus once again on what is to come. Will the BoJ start showing early signs of pivoting away from its ultra-loose policy with headline inflation now at target? Outside of central banks, Australia will release its latest jobs report. New Zealand will report its first-quarter GDP. What else is in store for markets next? 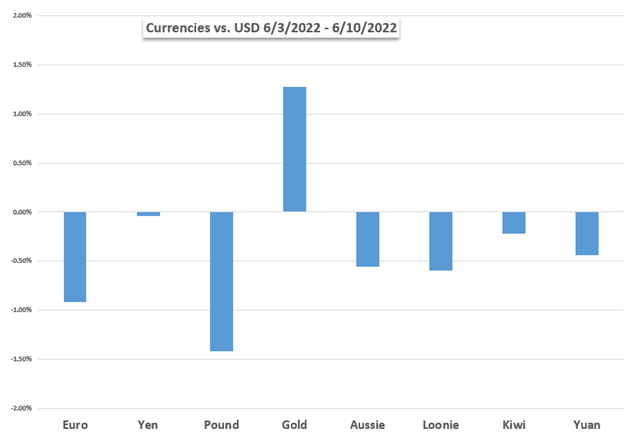 Australian Dollar Outlook: US Dollar is the Dominator for Now

The Australian Dollar has a very healthy economy behind it and the longer the currency stays undervalued, the stronger it gets. Will AUD/USD get a grip?

Swiss Franc Price Forecast: Parity on the Cards for USD/CHF Ahead of SNB Rates Decision

The Swiss Franc’s rapid decline of late may be in for further weakness ahead of the SNB and Fed rate decisions respectively, while USD/CHF looks to test 1.00.

The pound continues to suffer from fundamental challenges like the cost-of-living squeeze, despite a strong labor market, ahead of tricky BoE decision

The Japanese Yen’s descent continued last week after an inflation print firmed up the US Dollar. A dovish Bank of Japan is unlikely to take action despite the extreme weakness. Will JPY fall further?

The U.S. dollar is likely to rise next week if the Fed signals at its June meeting that it will have to raise rates more aggressively in response to broadening inflationary pressures.

Bitcoin Fails to Recover as Elevated Inflation Weighs on Sentiment

Euro Forecast: EUR/USD Now Turns to the Fed and BoE After a Hawkish ECB

The Euro is struggling to rise despite an increasingly hawkish European Central Bank as competition gets stiff between its major peers. Where to for EUR/USD with the Fed’s turn next?

Gold prices marked an outside-weekly reversal off key support this week as the bulls defend the uptrend yet again. Levels that matter on the XAU/USD weekly chart.

The big bear has returned to U.S. equities and next week’s inflation report brings yet another series of risks to the S&P 500, Nasdaq 100 and Dow Jones Industrial Average.