Risk assets closed mostly lower last week, although US equity markets trimmed losses heading into the weekend after comments from Federal Reserve Governor Jerome Powell spurred some buying. Mr. Powell stated that larger rate hikes are off the table for the time being. However, the Fed couldn’t guarantee a soft landing for the economy. The Dow Jones Industrial Average (DJIA) shed a bit over 2% for the week, while the high-beta Nasdaq-100 Index (NDX) sank nearly 3%.

The US Dollar softened slightly on Friday, but the DXY index remains near its highest level since December 2002. Economists will evaluate the upcoming April retail sales data set to cross the wires on Tuesday as the chances for a recession grow. Analysts see retail sales dropping at 0.9% on a month-over-month basis, which would be up from 0.5% m/m in March. A hotter-than-expected print may help cool fears over an impending economic slowdown.

Oil prices rose into the weekend, nearly trimming all losses from the week, as the high-demand summer season bolsters concerns about lagging supply. Gasoline prices hit a record high, according to AAA. That came despite a build in crude oil inventories at Cushing, Oklahoma. Still, inventory of refined products fell amid surging export demand across Europe and Asia. The gap left by Russian oil has fueled heavy overseas demand for US refined products. It is also important to consider ongoing releases from the Strategic Petroleum Reserve, which is skewing inventory data. Oil prices may increase going into the US Memorial Day holiday weekend later this month.

Across the Atlantic, the British Pound fell versus most of its peers, extending the prior week’s momentum after the Bank of England trimmed its economic growth targets. A weaker-than-expected print on GDP growth for March added to Sterling’s woes. GBP/USD may move on this week’s employment data, with analysts expecting to see 5k jobs added for February, according to Bloomberg data. UK inflation data is also likely to command some attention as markets continue to grapple with forecasting inflation.

The Australian Dollar fell to its lowest point since June 2020 versus the Greenback. A further tumble in iron ore prices weighed on the currency, adding to broader pressure from the risk-off tone across financial markets. China’s ongoing fight against Covid-19 has shuttered factories across the economic powerhouse, leading to lower consumption of metal-producing products. AUD/USD may have a chance at a revival this week if the Australian jobs report impresses. Analysts are expecting Australia to add 25k jobs for April, according to a Bloomberg survey. That would be up from 17.9k in March. RBA rate hike bets may increase on a rosy print, potentially pushing the Aussie Dollar higher alongside yields. 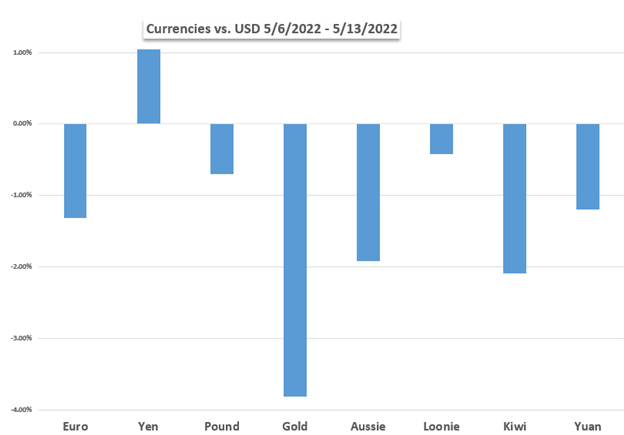 Gold fell last week as traders moved out of risk assets, boosting the US Dollar to its strongest level since December 2002. The yellow metal faces a tough path if Greenback strength persists.

The Australian Dollar fell, extending losses this past week. Will a jobs report revive some strength for AUD/USD? Technical and sentiment analysis seems to hint otherwise.

Oil prices could rise in the short term if China begins to dismantle the Shanghai lockdowns and the European Union reaches an agreement among member states to ban Russian oil imports.

Bitcoin, Ether Doom or Gloom : Is Terra the Death of Digital Assets?

Cryptocurrency remains indecisive after a week of turmoil and economic havoc. Bitcoin finds support above $30,000 but will Terra bounce back?

Stocks look to have temporarily bottomed this past week with a strong reversal, but it isn’t expected to last for an extended period.

The rally in USD/CAD appears to be stalling as the Relative Strength Index (RSI) reverses ahead of overbought territory.

Gold prices collapsed for a fourth consecutive week with the plunge now attempting a break of key technical support. The levels that matter on the XAU/USD weekly chart.

It was another strong week for the US Dollar, putting in its sixth consecutive week of gains as EUR/USD, GBP/USD and AUD/USD all fell to fresh lows.