The Dow Jones Industrial Average (DJIA) dropped for a fourth consecutive week, sliding nearly 2% as risk-sentiment deteriorated sharply into the weekend. The trigger appeared to be a tangible increase in the Fed’s rhetoric to considerably ramp up policy tightening in the face of surging inflation that threatens to derail the economic recovery. Rate traders responded by ramping up bets on 50 basis point rate hikes through overnight index swaps, which are pricing in full 50 bps hikes for the next three FOMC meetings. The United States’ preliminary gross domestic product (GDP) growth is due out on Tuesday, which will show how much the economy grew through March.

That led to a rebound rout in Treasuries that spread through global financial markets. Yields on government debt from UK Gilts to German Bunds shot higher. The French election, this weekend, may see some repricing across some European bonds, but the influence is likely to be negligible under an expected Macron victory. However, a Le Pen victory would likely have a rattling effect, although polls indicate that is an unlikely scenario. The Euro Area’s first-quarter inflation report may elicit some volatile trading in EUR/USD. A Bloomberg survey shows analysts expect Q1 core inflation to cross the wires at 3.1% y/y.

The Asia-Pacific region saw the risk-sensitive Australian Dollar and New Zealand Dollar fall versus the Greenback. Australia is set to report its first-quarter inflation data, with analysts expecting the year-over-year rate to increase to 4.6% from 3.6%. A better-than-expected print may trigger a rebound in the beaten-down AUD/USD pair. A broad weakening in metal prices weakened sentiment around the Aussie Dollar amid ongoing Chinese lockdowns.

USD/JPY may see a potential reversal on the Bank of Japan’s policy meeting decision on Thursday. The central bank has taken aggressive action to cap bond yields recently and no change to the benchmark rate is expected this week. However, an update to the bank’s inflation targets may induce some repricing in the currency. Options traders began to pull back bearish bets on the Yen last week, evidenced by a drop in 1-week risk reversals. The Bank of England’s rate hike bets is another key focus after a poor set of data cast doubt on the United Kingdom’s economic recovery, with retail sales and PMIs missing expectations. 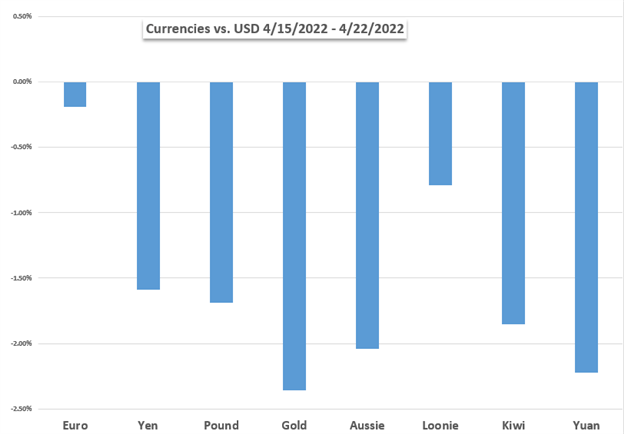 Heightened US interest rate hike expectations are weighing heavily on US indices. Will next week’s bumper crop of Q1 US earnings help to steady the market?

Slowing economic growth in the UK and bets that the Bank of England will not be as aggressive as the Fed during its tightening cycle are likely to weigh on GBP/USD in the near term.

Crude oil prices weakened as a stronger US Dollar and another drop in the S&P 500 undermined the sentiment-linked commodity. All eyes are on US GDP and the Fed’s preferred inflation gauge next.

The update to the US PCE Price Index may drag on the price of gold as the Fed’s preferred gauge for inflation is expected to downtick for the first time since August.

The US market continues to look weak as sellers hit stocks on a broad scale; levels and lines to watch in the days ahead.

The Canadian Dollar plunge continues with USD/CAD stretching towards the yearly highs on a fourth weekly-rally. Loonie levels that matter on the weekly technical chart.

Gold prices fell last week amid volatile trading, swinging from near the 2,000 level to below 1,940. The technical setup looks poised to see further losses over the coming days. Here are the levels to watch.

Oil prices have temporarily lost steam as producers weigh the effects of China’s lockdowns with supply constraints and an embargo of Russian energy by Western allies.

It was a big week for the US Dollar. The currency finally started to pullback but bulls were unwilling to let that last for long, and prices pushed right back up to another fresh yearly high.