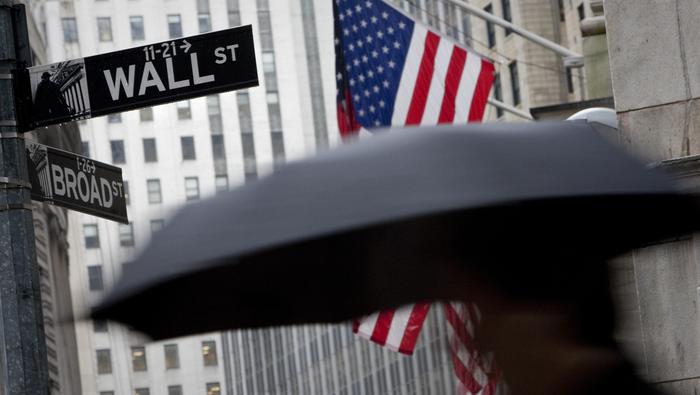 Global market sentiment was smashed this past week as Russia’s attack on Ukraine stretched beyond the first week. European markets were left particularly vulnerable. It was the worst week for Germany’s DAX 40 index since March 2020, falling over 10%. This is as the United Kingdom’s FTSE 100 index sank 7.6%, the most in two years.

On Wall Street things were also grim. Futures tracking the Nasdaq 100, S&P 500 and Dow Jones fell 2.45%, 1.30% and 1.33%. The VIX Volatility Index, also known as the market’s preferred ‘fear gauge’, closed at a new weekly high, the most since January 2021. Tensions are making life difficult for the Federal Reserve, amplified by this past week’s non-farm payrolls report.

Strong US labor market data, as the nation added more jobs than expected and unemployment declined further, continues to underscore tight conditions. Front-end government bond yields remained elevated as longer-term maturities faded. The 10-year and 2-year yield curve is quickly dropping off a cliff which may hint at rising risks of a recession down the road.

Taking a look at currencies, it was the worst week for EUR/USD (-2.97%) since March 2020. EUR/CHF sank 3.89% in the worst performance since the SNB scrapped the Franc’s peg to the Euro in early 2015. The haven-oriented US Dollar and similarly behaving Japanese Yen outperformed. EUR/JPY tumbled 3.64%, the most since May 2011.

Gold and crude oil prices are also on the rise. The former gained 4.2%, the most since July 2020. This is as WTI soared 25%, the most since May 2020. The inflationary shock of tensions in Europe is thus placing the Federal Reserve in a tricky situation. All eyes are on US CPI next week, where headline growth is expected at 7.9% y/y for February, up from 7.5% prior.

All eyes will also be on the European Central Bank for its March monetary policy announcement. Odds of tightening have been dramatically pulled back. However, much like the Fed, the ECB is facing a rising inflationary environment, with very little room to ease. China will also release inflationary figures. What else is in store for markets this week? 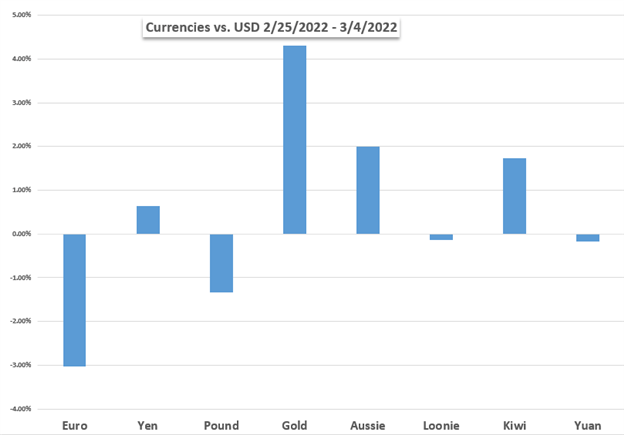 The DAX 40 remains at risk to Russia’s attack on Ukraine, will the ECB soothe markets? This is as the Nasdaq 100 nervously awaits US CPI. Another hot inflation print will likely keep traders on their toes.

A toxic combination of a weak British Pound and a strong US dollar has bundled GBP/USD to the edge of an important support zone.

The update to the US Consumer Price Index (CPI) may keep the price of gold afloat as inflation is expected to pick up for the sixth consecutive month.

The Australian Dollar has found support from booming commodity prices despite a risk-off environment. Where to for AUD/USD?

The Dollar continues its run of strength; further momentum could soon have long-term levels in play.

Stocks struggled this week as a barrage of war headlines continues to weigh on market sentiment. Levels that matter on the SPX500, Nasdaq & Dow technical charts.

Gold bulls have continued to push as tensions have yet to de-escalate in Ukraine, and with an attack on a nuclear power plant it doesn’t look as though resolution is on the horizon.

Fragile market sentiment due to the Ukraine war may bolster USD/CAD in the coming days despite decade-high oil prices, but any de-escalation of the crisis will be bullish for the Canadian dollar.