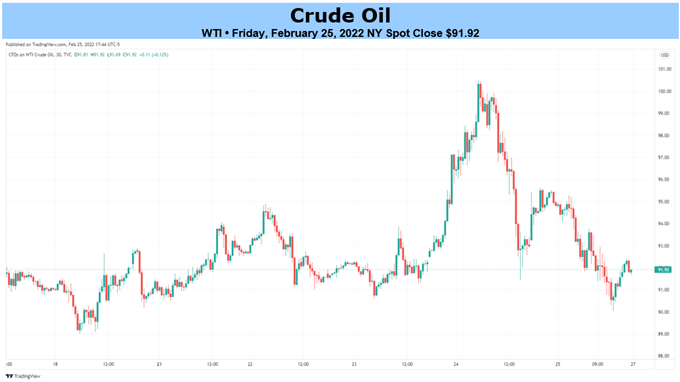 WTI crude oil prices briefly hit the $100 mark before paring gains towards the end of the week after Russia launched a military attack on Ukraine - a move that boosted market volatility across global assets. Investors assessed the latest round of western sanctions against Russia, the severity of which appears to have fallen short of expectations. This helped to alleviate concerns over supply disruptions in the oil market, which was already facing tight conditions and rising demand. WTI has surged 25% and Brent has soared 30% this year, fuelling concerns about inflation around the globe.

Russian President Vladimir Putin said that the country doesn’t plan to “occupy” its neighbour, but that action was necessary after the US and its allies crossed Russia’s bottom line by expanding the NATO alliance towards the East. Russian forces are reportedly pushing closer to Kyiv, Ukraine’s capital city.

President Joe Biden retaliated with economic penalties, including actions against five major Russian banks. The sanctions do not include barring Russia from the SWIFT payment network, which is essential to the settlement of trade in crude oil and other Russia-produced natural recourses. There is also no sign of restrictions on Russian oil and gas exports, which are crucial source of energy to the European countries. This may explain the wild swing in equities, crude oil and gold on Thursday, as investors shrugged off concerns about tougher punishment from the West that might have compounded supply constraints in the energy market.

Russia is the world’s second largest oil exporter after Saudi Arabia, shipping around 5 million barrels of crude oil per day. Nearly half of it went to the European countries in 2020. Sales of energy products accounted for over 60% of Russia’s total exports in 2021. Russia remained the largest supplier of natural gas and crude oil to the EU in 2021, underscoring their crucial energy ties. Therefore, the EU probably couldn’t afford to ban Russian oil exports, perhaps judging that the economic costs of such an action outweigh the geostrategic benefits. With that in mind, crude oil prices may see their upside potential capped by EU’s tolerance towards Russian exports. 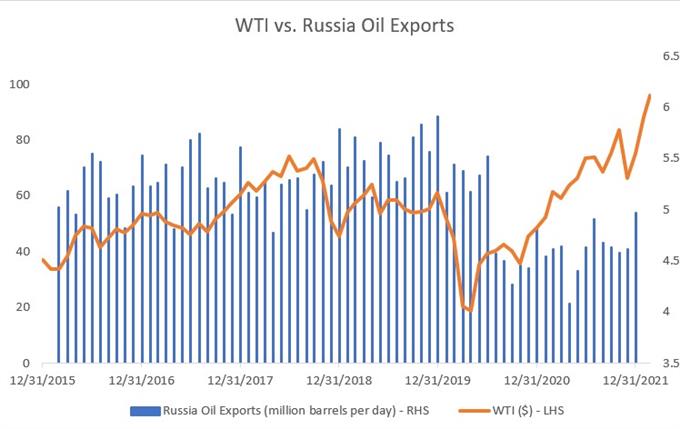 Still, geopolitical uncertainties remain high after Russia invaded Ukraine, and this may keep crude oil prices afloat in the weeks to come. In the near term, additional supply is expected to be limited while demand is rising as the global economy recovers from the Covid-19 pandemic. This renders oil prices capable of large gains should there be a major supply disruption. Goldman Sachs now sees oil prices heading towards $125 bbl over the next 3 months.

Meanwhile, the US is working with other major consumption nations including Japan and Australia to coordinate releases from strategic reserves, a move that may cool prices.

Market participants are also waiting for developments in nuclear talks with Iran, which bring hopes for more Iranian barrels on the market. The rally in oil prices over the past few weeks, however, has changed the calculations for any prospective nuclear agreement by provide Iran with higher cash flow from record sales to China.

--- Written by Margaret Yang, Strategist for DailyFX.com To contact Margaret, use the Comments section below or @margaretyjy on Twitter