Evacuations Begin as Russia-Ukraine Tensions Escalate into the Weekend

US President Joe Biden, UK Prime Minister Boris Johnson an other western allies have warned that Russia is trying to create a pretext for war after reports of 'shelling' emerged out of eastern Ukraine on Thursday.

A pre-school in the Donbas region - an area in eastern Ukraine occupied by Russian-backed separatists – was hit by ‘shells’ causing three casualties and the planned evacuation of the community into Russia. U.S. Secretary of State Antony Blinken warned that Russia may attempt to manufacture an excuse to declare war on Ukraine, stoking fears that the incident may be used as justification for conflict.

Both sides have blamed each other for the incident and no widescale conflict has begun because the incident, while unfortunate, is not being viewed as serious. In addition, recent diplomatic engagements failed to de-escalate tensions and new reports suggest an increase in troops on the Ukrainian border despite communications from Moscow suggesting a withdrawal of troops around the southern and western military districts.

Build up of Troops Along Ukraine’s Border

Earlier this week Moscow reported a partial withdrawal of troops in the southern and western military district after completing a series of drills. NATO and the US saw no material difference in the number of troops at the border and, in fact, according to the U.S., Russia has actually increased the number of troops from 100,000 in January to between 169,000 and 190,000.

Last week, the EU told non-essential staff to leave the Ukrainian capital, Kiev and Russia took measures to expel the U.S. deputy ambassador in a tit-for-tat retaliation to recent US statements.

On Friday, U.S. Defense Secretary Lloyd Austin announced the planned sale of 250 Abrams tanks to Poland to sure up the defenses of its eastern European ally. It is reported that Russian forces are 200 miles from the Polish border. Thus far the U.S. has sent Ukraine nearly 5000 troops and a fighter aircraft as part of Washington’s response to Russia’s posturing along the Ukrainian border and into Belarus.

Financial markets are very likely to remain sensitive to developments in Ukraine and risk sentiment has waned in the last two trading days of this week and last – in preparation for the weekend when markets are closed.

Financial markets have responded to the possibility of an invasion and subsequent war. Gold shot up to 1900 on Friday, while the tech-heavy S&P 500 sold off on Thursday into Friday. Bitcoin, one of the most speculative ‘assets’, also declined to below 40k while the Aussie dollar actually strengthened at the start of the week but has turned sharply lower on Friday in sympathy with other risk correlated assets. 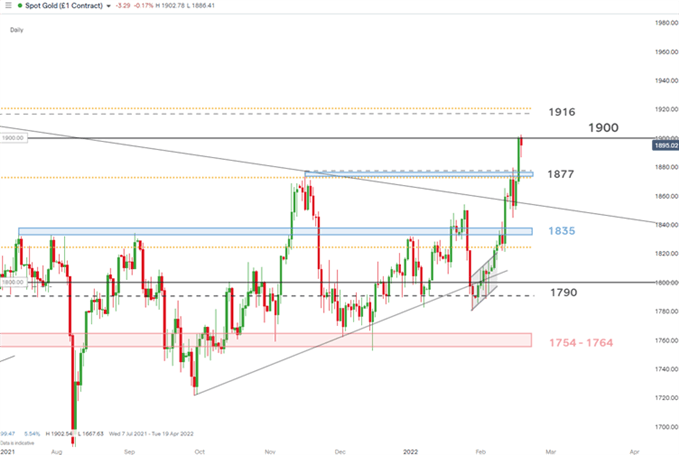