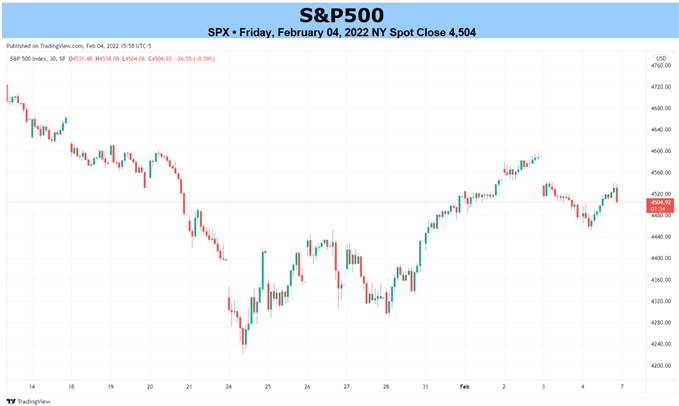 The Dow Jones, S&P 500 and Nasdaq 100 indices entered consolidation mode at the start of 2022, weighed by rising treasury yields, inflationary pressure, and expectations that the Fed may tighten monetary policy at an accelerated pace. An uneven earnings season has also led to heightened market volatility, with the FAANG companies painting a divergent outlook.

While Netflix and Facebook disappointed investors with lower-than-expected forward guidance and user growth, the rest - Tesla, Apple, Alphabet and Amazon - have topped market estimates with stellar results. These companies account for a large share of the S&P 500 index, and therefore their earnings tend to have an outsized impact on the benchmark.

Facebook lost more than a quarter of its market value on Thursday, dragging the S&P 500 index down by more than 2%. Investors were disappointed to see its Daily Active Users (DAUs) falling for the first time, and its revenue guidance below expectations. Amazon soared 15% during after-hours trade as its earnings per share (EPS) beat consensus by a wide margin, thanks to its diversified business model and investment in the electric vehicle company Rivian. S&P 500 index futures rebounded over 1% during after-hours trade as sentiment turned positive.

A divergent earnings picture underscores a challenging environment for tech giants as they attempt to maintain growth momentum amid rising wage pressures and the gradual exit from the pandemic, which affects people’s lifestyle and appetite for digital services. Demand for smartphone devices, goods and electric vehicles remains robust though, putting supply chain constrains into focus.

So far in the earnings season, more than half of the S&P 500 companies have reported their results. Among them, 80% have beaten analysts’ forecasts with an average earnings surprise of +6.6%, according to Bloomberg data. The percentage of companies that delivered positive surprises and their magnitude are slightly lower than in the previous quarter, however.

Looking ahead, Pfizer, Coca-Cola and Twitter are among the key companies due to report results. Below is a summary of what to look out for.