The Mexican peso is likely to struggle against the U.S. dollar in the near term amid expectations that the Federal Reserve will aggressively withdraw pandemic-era support in pursuit of its dual mandate. This means the USD/MXN could accelerate its recent advance, propelling the exchange rate above last month’s high (20.91) towards the 21.00 psychological level in the days ahead.

Bets in favor of a steeper tightening cycle have increased on Friday following strong U.S. employment data (NFP). According to the Bureau of Labor Statistics, the North American economy added 467,000 jobs in January, more than triple the consensus forecast. The robust labor market defied the Omicron-induced slowdown and pushed Treasury rates up across the curve, with the 2-year yield soaring 12 basis points to 1.32% and the 10-year yield jumping 10 basis points to 1.93%, its highest level since early 2020.

Next week, inflation data in the U.S. will get all the attention and the results could ramp up rate-hike wagers. That said, investors expect the January Consumer Price Index to rise 7.3% y/y from December’s 7%, a figure that would represent the highest reading since February 1982 when the metric clocked in at 7.6% y/y.

A red-hot CPI print will raise the likelihood that the Fed will front-load policy adjustments at its next meeting, boosting the greenback and weighing on the EMFX complex. With the probability of a 50-basis point hike at ~35% for the March conclave, there is still of room for expectations to move higher. This is a potentially bullish driver for USD/MXN that traders should keep an eye on in the coming sessions. 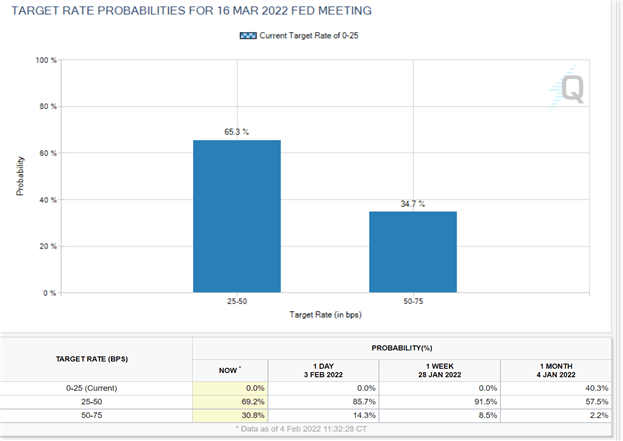 Turning our focus to other catalysts, Banxico’s monetary policy announcement next Thursday may also be relevant for MXN price action. The central bank is seen lifting borrowing costs by 25 bp points to 5.75%, but the decision has been discounted, so it shouldn’t trigger a significant response in the currency market.

While some analysts are forecasting a half-percentage-point rate increase amid two-decade high core inflation (5.94% y/y), the central bank is unlikely to follow that path with the economy in a technical recession and expected to grow at a paltry 1% pace in 2022. In any case, moves in USD/MXN should be dominated by yield curve dynamics in the U.S. next week. 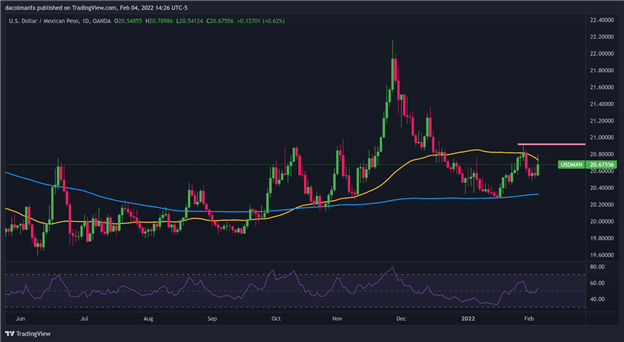