US markets are set for another round of high-profile earnings, capable of dragging out the volatility seen last week when Meta, Amazon, Snap and Pinterest whipsawed equity prices. The benchmark S&P 500 index and tech-heavy Nasdaq-100 Index (NDX) gained around 2% on the week, while the cyclically-sensitive Dow Jones Industrial Average added just over 1%. Inflation data via the CPI index is also on tap this week, but outside of that, there are few economic event risks, which will leave investors laser-focused on earnings reports.

The Walt Disney Company ($DIS) is slated to report first-quarter earnings on Wednesday, with analysts expecting higher revenues, driven by Disney+ subscriber growth and increased theme park traffic. The consensus estimate calls for an addition of 8.2 million Disney+ subscribers, per Bloomberg, driven by the streaming service’s expanding lineup, including the hit show The Book of Boba Fett, as well as new bundling options with Hulu. Disney’s theme park segment is expected to return rosy numbers amid higher demand after travel, and other Covid-related restrictions were rolled back. The implied 1-day move sits at 5.89%. 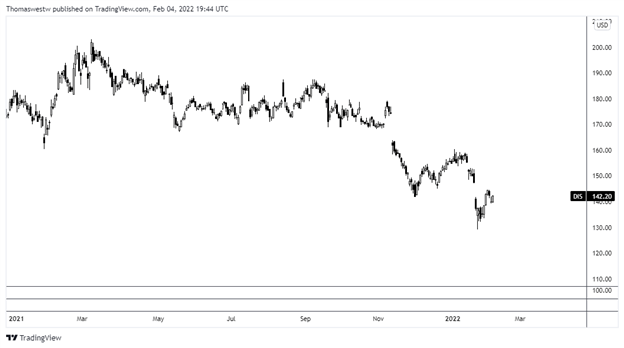 Twitter will report fourth-quarter results on Thursday before the opening bell. Analysts expect to see revenues grow from Q4’2021, but higher costs – as seen with Meta’s earnings report last week – may see earnings drop from the prior Q4 period when Twitter reported earnings per share of $0.38 on 1.29 billion in revenue. While the Twitter platform is less susceptible to Apple’s IOS changes, it will likely remain a drag on growth. The implied move is a lofty 16.6%. That said, an outsized beat or miss could open the door to a volatile price reaction. 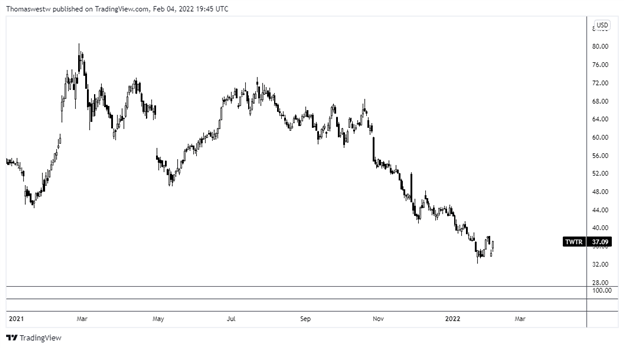 Uber, the rideshare company, will report earnings on Thursday following the closing bell. The company’s mobility segment is expected to bounce back amid reopening’s across major cities. However, its food delivery segment may not impress amid increased competition and rising labor costs. The continuation of remote work amid the recent Omicron surge may have dampened ride frequencies, leaving estimates hard to forecast. The implied 1-day move sits at 11.1% as of Friday, February 04. 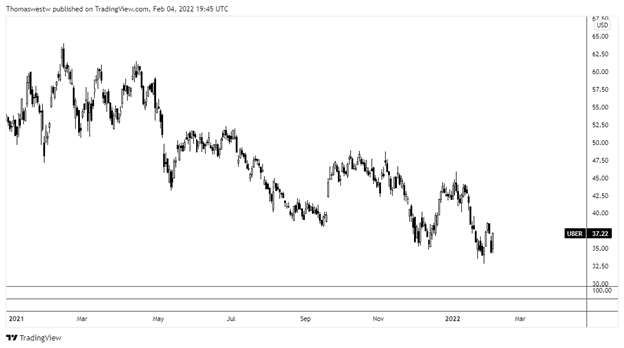 Alibaba, the Chinese e-commerce titan, is set to report next week on February 16. The company’s revenues are expected to increase by 11.1% on a year-over-year basis, but higher costs, brought on by supply chain issues and other pandemic-related headwinds, are expected to drag earnings per share (EPS) growth down by 26.1% y/y, according to Bloomberg estimates. The implied 1-day move sat at 2.67% as of Friday. 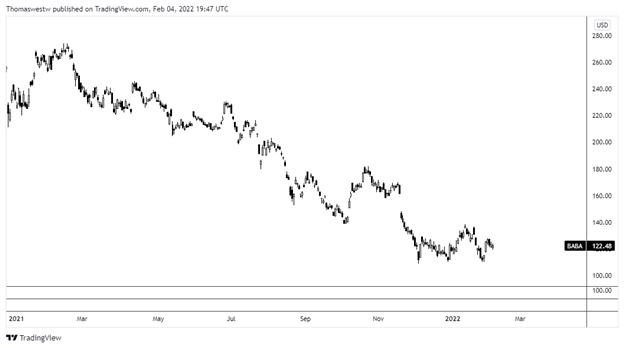