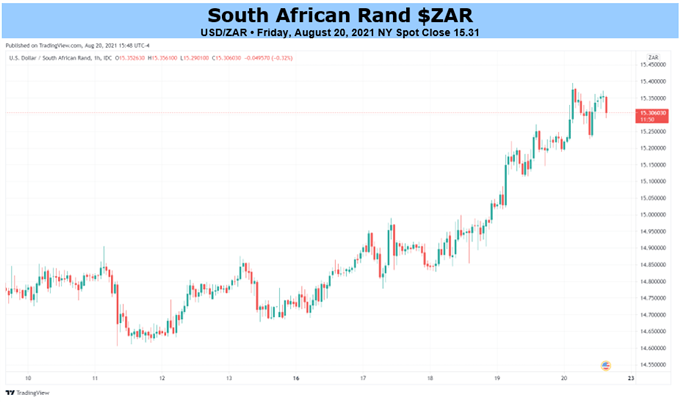 Emerging markets have been in decline since June this year but have dropped off more aggressively this last week. This as evidenced by the JP Morgan Emerging Market FX Index chart below:

Recent events in SA, mainly the looting of shops and subsequent cabinet reshuffle, have not done the Rand any favors as the country looks to attract foreign direct investment as one of the strategies to grow the local economy.

This last week saw considerable depreciation in the ZAR against the dollar, surrendering around 3.34% (taken at 18:00 CAT, Friday). A noticeable move was witnessed on Thursday which continued into Friday but later that day retraced off the intra-day high above 15.38.

This coming week could see a retracement towards the 15.00 psychological level but much of this depends on the level of USD appeal as riskier markets such as EM markets and major equity markets also experienced a sizeable sell off.

15.38 remains the most relevant level of resistance if the current trend is to continue with 15.57 and 15.70 the further upside resistance targets. 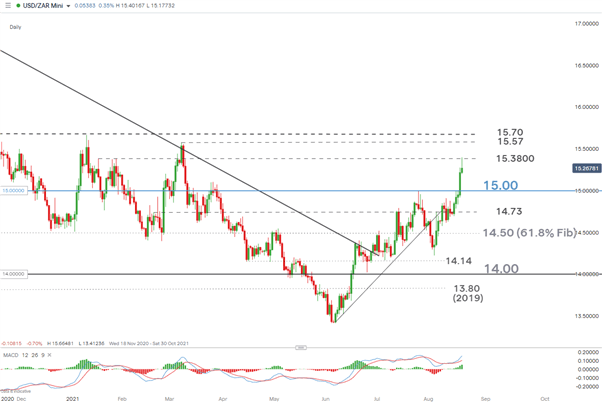 Should the bullish momentum continue into the coming week, 21.00 becomes the next hurdle followed by the 50% Fib at 21.3370 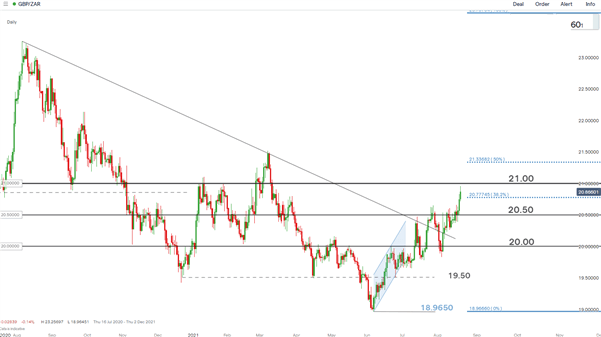 EUR/ZAR rose by 2.62% for the week (18:00 local time, Friday) coming just short of the psychological 18.00 level. The pair has quite a long way to go to get to 18.30 and could find resistance at 18.20 should the bullish momentum continue into next week. A retracement of the bullish advance highlights the zone of resistance between 17.75 and 17.80 (purple area) before 17.50 props up a more solid level of support which looks some distance away. 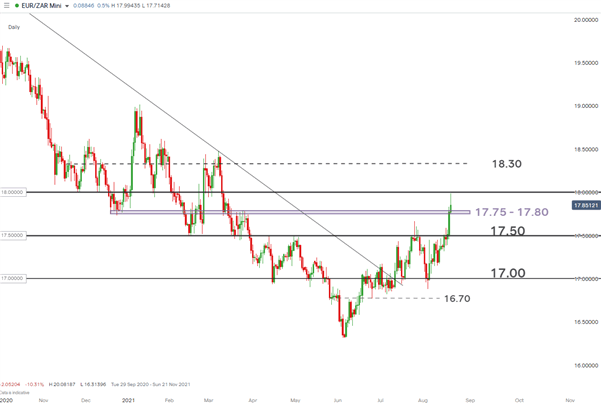 Risk Events in the Week Ahead

Next week’s major talking point will be the Jackson Hole Economic Symposium where we are likely to see an appearance from the Chairman of the Federal Reserve Bank, Jerome Powell. Market participants will no doubt dissect every word he says after the FOMC minutes this week provided more support towards the inevitable tapering exercise.

However, a recent poll conducted by Reuters still favors an announcement of future tapering only in September with the first round of tapering only starting early next year.

Interest rates affect FX markets because the unwinding of accommodative monetary policy in the US typically leads to eventual increases in the interest rate, which makes US dollar interest-bearing investments more attractive. From a risk-reward perspective – the safer dollar will earn a higher return (yield) than before and may be viewed more favorable when compared to the higher yielding but riskier ZAR. 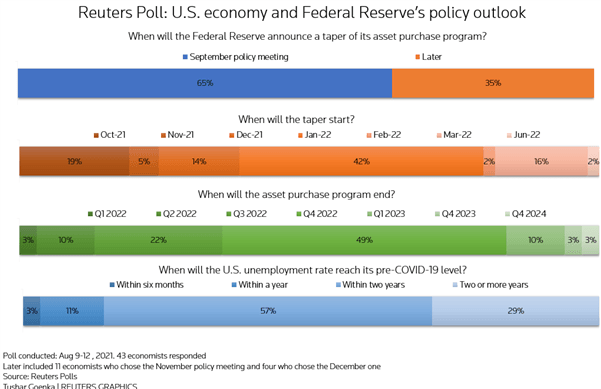 Interestingly enough, US PCE data comes out midway through the symposium, which further supports the hypothesis that any announcements regarding tapering are more likely to happen at the September FOMC meeting or even later. The only hard hitting ZAR data release next week is the unemployment figure.