Global market sentiment wobbled this past week after initial euphoria on a disappointing US jobs report that further cooled Fed tapering expectations. A much higher-than-expected US CPI report, along with the implications of better average hourly earnings from NFPs, boosted longer-term Treasury yields. But, softer retail sales helped rekindle market sentiment into the end of the week.

The tech-heavy Nasdaq Composite, Dow Jones and S&P 500 closed -2.34%, -1.14% and -1.39% respectively. Germany’s DAX 30 managed to clock in a slight +0.11% rise. Japan’s Nikkei 225 fared worse, closing -4.34% as the nation planned to add Hokkaido, Okayama and Hiroshima to the state of emergency. The VIX briefly spiked to its highest since March before turning lower.

Due to risk aversion, the anti-risk US Dollar found itself on the offensive. It outperformed G10 currencies like the Australian Dollar, New Zealand Dollar and Japanese Yen. An exception was the British Pound, which rallied in the aftermath of the Scottish election where the SNP fell one seat short of a parliamentary majority. That cooled independence referendum woes.

However, the Greenback’s momentum appeared to be short-lived and could be vulnerable heading into the new week. More Fedspeak is in store, with the Vice Chair presenting along with presidents of the Atlanta and Dallas branches. FOMC meeting minutes are also on tap. Further dovish commentary and refrain from policy tapering may keep market sentiment intact.

That may leave gold and crude oil prices in a bullish state. Even speculative assets, such as Bitcoin, may continue benefiting from record-low global borrowing costs and depressed bond yields. That said, the perceived loftiness in some markets could make episodes of risk aversion more frequent. This is as England and the city of New York take the next steps in easing lockdown restrictions.

What else is in store for markets in the week ahead? 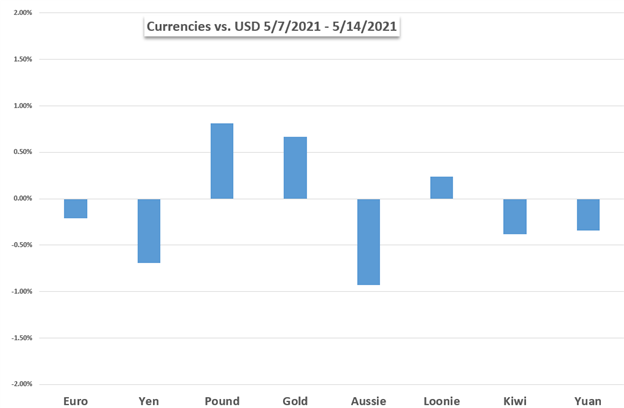 The US Dollar finished off an eventful week after CPI and retail sales injected volatility into markets. FOMC is now in the Greenback’s sights as taper talks linger.

Stock Market Forecast for the Week Ahead: Will Risk Appetite Recover?

US equities endured turbulent price action last week and could be positioned for further volatility as fundamental forces butt heads and investors look to negotiate the shifting landscape.

The Federal Open Market Committee (FOMC) Minutes may drag on the price of gold as the central bank appears to be in no rush to switch gears.

GBP/USD on the front foot to close the week. Bulls aim for YTD peak, while EUR/GBP range is maintained.

The Euro eyes Eurozone GDP, inflation and PMI data next week. However, still-dovish ECB commentary from top officials may dampen the impact of better-than-expected outcomes on EUR/USD.

The Nasdaq 100 index has likely formed a bearish Gartley pattern, which hints at further downside potential. Negative MACD divergence on the weekly chart suggests that upward momentum may be fading.

Gold surged more than 10% off the yearly low with then XAU/USD breakout now eyeing key technical resistance. These are the levels that matter on the Gold weekly chart.

WTI crude oil is currently trading up against major resistance via the 2019 and 2020 highs within the confines of a channel; something has to give.

AUD/USD remains range-bound but trend potential exists elsewhere in pairs such as AUD/JPY or AUD/CAD.

It’s not a seasonally friendly time of the year for the British Pound, a potential headwind among otherwise bullish technical considerations.