Global markets were relatively calm this past week. Equity investors drove stocks higher, sending major indices like the S&P 500 to fresh all-time highs. Perhaps this was motivated by a sharply weaker US Dollar and repricing of Fed taper risk that followed a big miss on NFPs. In turn, the disappointing data brings the ‘bad news is good news’ narrative back into focus for stocks.

Gold jumped 3.6% to its highest level in 12-weeks as real yields tumbled and helped catapult precious metals. Crude oil was able to eek out a modest 2% gain with concerns about demand from India overshadowed by optimism surrounding economies reopening elsewhere. EUR/USD price action exploded 147-pips higher on the week thanks to broad-based US Dollar selling pressure. GBP/USD spiked 170-pips as the Sterling strengthened in response to the Bank of England tapering its QE program. Although, with the UK ending its lockdown and vaccinating over half of its population, the FTSE 100 hit a fresh 15-month high thanks to a 2.3% advance.

Looking to the week ahead, big ticket items include the release of US inflation and retail sales data. These high-impact data releases stand to set the tone for trader risk appetite. Not to mention, consumer sentiment reports are due out of the Eurozone and US as well. Other notable event risk detailed on the DailyFX Economic Calendar includes the release of 1Q UK GDP slated to cross wires Wednesday, 12 May at 06:00 GMT. Also, Banxico is scheduled for an interest rate decision on Thursday, 13 May at 18:00 GMT and warrants keeping tabs on USD/MXN price action.

Key FOMC officials – like John Williams, Lael Brainard, and Richard Clarida – will be giving speeches next week as well. Their commentary on Federal Reserve policy could carry more weight than Dallas Fed President Robert Kaplan, a non-voter, who has suggested that the central bank should think about tapering “sooner rather than later.” Markets are also expecting Bank of Canada (BoC) Governor Tiff Macklem and Bank of England (BoE) Governor Andrew Bailey to give their own remarks on monetary policy in the week ahead. The release of European Central Bank (ECB) meeting minutes due Friday, 14 May at 11:30 GMT could be worth having on the radar too.

Bitcoin and Ripple oscillated slightly higher last week while Ethereum extended its breakout to a new record. Cryptos have since started to experience some headwinds, however. Elon Musk’s Saturday Night Live performance over the weekend was quite entertaining, but lack of hyping Dogecoin disappointed bulls and sent the alt-coin spiraling nearly -45% lower from its 08 May intraday high. This seems to be weighing on the broader crypto space.

Speaking of cryptocurrencies, Coinbase ($COIN) is on deck to report first quarter earnings on Thursday, 13 May 9, 2021 following the close on Wall Street. This will be the cryptocurrency exchange’s first earnings report since going public about a month ago. Their disclosure of transaction volumes and active clients could shed light on growing demand for alt-coins, and in turn, spark some volatility for major cryptocurrencies. Disney ($DIS) is also due to release quarterly earnings results after-hours on Thursday, 13 May and could garner some attention from equity investors. What else are traders watching out for in the week ahead?

Will Dow Jones Outperform Nasdaq 100 as Inflation Debates Heat Up?

Optimism about post-Covid recovery drove capital from tech and into cyclical sectors, boosting the Dow Jones and pulling down the Nasdaq 100. Inflation expectations hit a multi-year high. Will this trend be sustained?

US Dollar Weekly Outlook - US NFPs Massive Miss, Heavyweight Data Next Week Will Steer the US Dollar

The US dollar rattled lower after a huge downside miss in the latest Jobs Report, will look to a clutch of heavyweight data releases to shape its near-term direction.

Another week of record breaking gains in the alt-coin space, while Ethereum (ETH) continues to print fresh highs and eats into Bitcoin’s (BTC) market dominance.

Falling real rates of return and rising inflation concerns may continue to drive bullion prices higher in the near term, as attention turns to April’s inflation and retail sales data.

Last week ended well for EUR/USD, with Friday’s shockingly poor US jobs data giving it a lift, and this week could well see its advance extend if it can break conclusively above resistance at 1.2150.

The UK GDP report may generate a limited reaction in GBP/USD as the Bank of England (BoE) slows the pace of its weekly asset purchases.

The pro-risk Australian Dollar may extend gains after the record miss in US jobs data, amplifying dovish rhetoric from the Federal Reserve and keeping the Dow Jones and S&P 500 intact.

Dow Jones & Nasdaq 100 Technical Forecasts for the Week Ahead

The Dow Jones and Nasdaq 100 have seen their price patterns diverge as industrials outpace technology stocks. As a result, the two indices possess opposite technical forecasts for the week ahead.

US Dollar Outlook: DXY Plunges into May- USD in Free-Fall Post-NFP

The US Dollar plummeted on the heels of NFP with an outside-weekly reversal risking further May losses. Here are the levels that matter on the DXY charts.

It was a big week for Gold bulls and Gold prices broke out to fresh two-month-highs, finally taking-out the 1800 level along the way.

Crude oil prices closed the week slightly higher on balance, but the commodity appears to be struggling at technical resistance as WTI peels back to test bullish trend support.

USD/CAD sold off aggressively last week, putting it into position to test the important 2017 low; trading bias is neutral to bearish. 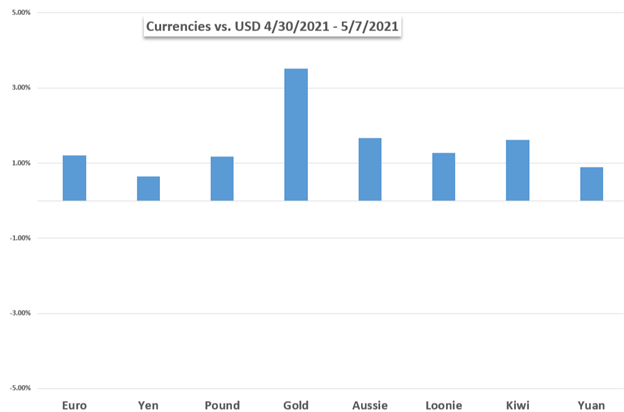