The first full trading week of April saw market sentiment extend what has been the dominant exuberance since last year’s Covid-induced low in financial markets. On Wall Street, the Dow Jones and S&P 500 added onto gains, pushing deeper into record highs. This time around however tech stocks outperformed their value-oriented counterparts as the Nasdaq Composite soared.

European equities were also in the spotlight, particularly as the UK’s FTSE 100 outperformed most of its regional, North American and Asia-Pacific counterparts. Stock investors found some relief in falling longer-term Treasury yields, both in the United States and externally. Still-dovish commentary from the Federal Reserve cooled 2022 rate hike bets.

As a result, it was not a pretty week for the US Dollar as it underperformed most of its G10 peers. The currencies that capitalized on falling yields in the US were the Euro, Japanese Yen and Swiss Franc. Anti-fiat gold prices nudged slightly higher. Crude oil prices weakened as rising Covid cases in India, lockdowns in parts of Canada and Europe dented the outlook for demand.

The first-quarter earnings season is starting to roll in, with a busy week ahead for banks in the US such as JP Morgan, Citigroup and Bank of America on tap. Financial stocks have generally been underperforming, but their pace has been picking up lately amid higher bond yields. Local CPI and retail sales data will also be on the docket. The former will be key to watch for bonds.

Fed Chair Jerome Powell will also have a moderated Q&A session at the Economic Club of Washington on Wednesday. He could reiterate recent dovish language, perhaps bolstering gold prices. The Euro is eyeing ECB Chief Christine Lagarde, who will also be at a Reuters event on the same day. The New Zealand Dollar will be awaiting the RBNZ rate decision. China reports first-quarter GDP. What else is in store for markets ahead?

Earnings season begins this week with the arrival of quarterly reports from the country’s largest banks. Can they shrug off losses from the recent Archegos blowup and rally higher or will risk aversion take root?

Euro Forecast: EUR/USD Outlook Tilted to the Downside in Week Ahead

EUR/USD has been climbing gently in the past few days after its recent steep falls. However, that was probably just position-squaring ahead of further weakness.

Gold Weekly Forecast: Gold Prices Preparing for a Break Out?

Key resistance remains a challenge for gold, eyes on US CPI for breakout.

The RBA highlighting several key risks to the local economy in its semi-annual Financial Stability Review may drive AUD lower against haven-associated currencies despite the expectation of strong Q1 GDP figures out of China.

The New Zealand Dollar is in a tricky spot. On one hand, rising stocks can propel NZD. On the other, a dovish RBNZ ahead could cool bond yields as the government tackles soaring housing costs.

USD/MXN is keeping nicely to its descending trendline, aiming below the 20 pesos mark in the short-term.

The Nasdaq 100 index has likely formed an inverse “Head and Shoulders” pattern, which is typically viewed as a bullish trend reversal indicator. Prices may advance further to challenge their all-time highs.

The opening range for April raises the scope for a further decline in the US Dollar Index (DXY) as the monthly high (93.34) lines up with the first day of the month.

Gold is facing a Double Bottom Pattern’s neckline after confirming a longer-term trendline. Is a bullish reversal in order?

The AUD/USD chart is tilting towards lower levels, will need to round the corner soon to turn outlook bullish.

It was a big Q1 for USD/JPY but so far Q2 has been a far different tone. Which side will prevail? 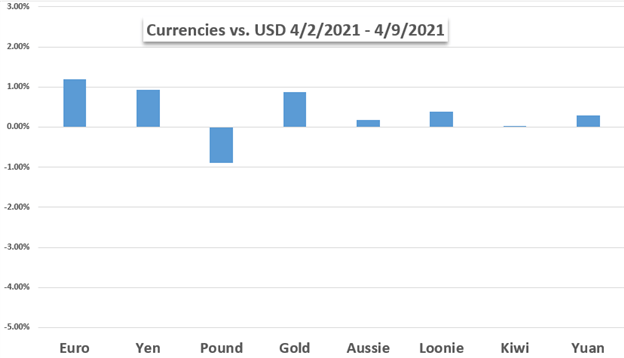