Market sentiment was cautiously pessimistic this past week, with the Dow Jones, S&P 500 and Nasdaq Composite all closing in the red. European equities were a mixed bag. In Germany, the DAX 30 gained over 0.8% as the FTSE 100 sank a roughly equivalent amount. In the Asia Pacific region, the Nikkei 225 gained 0.25% as Australia’s ASX 200 weakened almost 0.9%.

All eyes were on the Fed, which continued to remain fairly sanguine about longer-term Treasury rates. The 10-year yield gained about 6.5% this past week, rising to 1.73% as it touched late January 2020 highs. Rising yields in the United States continued to support the US Dollar as it outperformed the British Pound, Euro and Australian Dollar.

Crude oil prices sank as vaccine rollout woes in Europe and a reintroduction of lockdowns in parts of France hindered demand prospects. In fact, it was the worst week for WTI since late October. Gold prices were slightly higher, but rising government bond rates deprived XAU/USD from its upside potential.

The week ahead notably dims down in terms of economic event risk. Fed Chair Jerome Powell and Treasury Secretary Janet Yellen will be testifying before the Senate Banking Committee. Further restraint about the bond market could offer the green light for yields to continue climbing, with eyes on the central bank’s preferred measure of inflation, or Core PCE on Friday.

Speaking of central banks, the Swiss National Bank is on tap for the CHF. Rising external rates may leave the currency vulnerable in the long run as those locally stay relatively depressed. A disappointing Covid vaccine rollout will likely have EU leaders on edge during Thursday’s leaders summit. What else is in store for financial markets ahead?

Dow Jones, Nasdaq 100, FTSE 100 Forecasts for the Week Ahead

US equities will have to juggle an encouraging message from the Fed last week and the coming end of the Supplementary Leverage Ratio (SLR) that might see Treasury yields rise further.

US Dollar Outlook: The Ongoing Battle for Yield Control

The US dollar is being underpinned by rising US Treasury yields as inflation fears continue to stalk the market.

The last week of March brings about a quieter economic calendar for Australia, with the trio of PMI reports the sole focus.

Euro Forecast: Prepare for Possible EUR/USD Break to the Downside

EUR/USD looks ready to break out from the relatively narrow range it has traded in for most of this month. It could go either way but the downside looks more likely.

Key data prints coming out of the UK may keep the British Pound within the monthly range as the Bank of England (BoE) retains the current course for monetary policy.

Swiss Franc Forecast: Why CHF May be at Risk Despite Wobbly Stocks, Eyes on SNB

The Swiss Franc has been struggling to capitalize on stock market volatility ahead of the SNB policy meeting. Rising government bond rates externally may leave CHF vulnerable in the long run.

Gold prices have rebounded robustly higher in recent days, and may extend gains in the coming weeks after breaching key resistance.

The Nasdaq 100 index failed to breach above the trend-defining 50-day SMA line and has reversed lower since. The formation of a “Death Cross” may point to further downside potential.

Dollar is back at resistance near the yearly highs with the post-FOMC snapback threatening a possible breakout. Here are the levels that matter on the DXY charts.

Cable calmed and GBP/JPY put in its first bearish weekly bar in more than two months. Is the British Pound about to turn-around?

USD/CAD and AUD/CAD shifted through key technical levels last week. What are the paths of least resistance for the Canadian Dollar versus the Greenback and Aussie-Dollar? 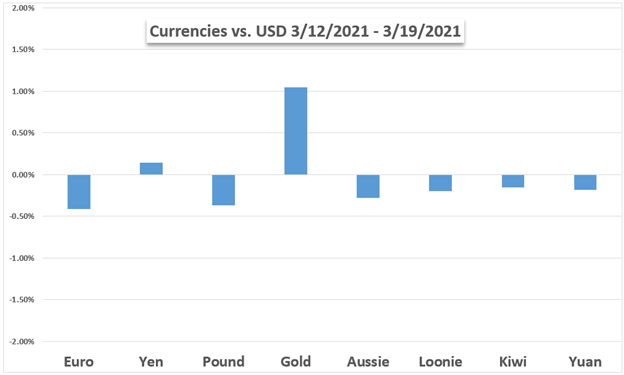