The price of oil extends the advance from the monthly low ($51.64) as US crude inventories contract for the second consecutive week, and key market themes may keep oil prices afloat as global production remains subdued.

The price of oil trades to fresh yearly highs as the decline in US crude inventories boosts the outlook for consumption, and the ongoing efforts by the Organization of the Petroleum Exporting Countries (OPEC) may keep crude prices afloat as Saudi Arabia remains on track to reduce supply by 1 million b/d until April.

It remains to be seen if OPEC and its allies will regulate the energy market throughout 2021as the most recent Monthly Oil Market Report (MOMR) states that “world oil demand is forecast to increase by 5.9 mb/d, unchanged from last month’s report, to total 95.9 mb/d,” but the group appears to be in no rush to restore crude production as the producers pledge to “remain vigilant and flexible” at the February Joint Ministerial Monitoring Committee (JMMC) meeting. 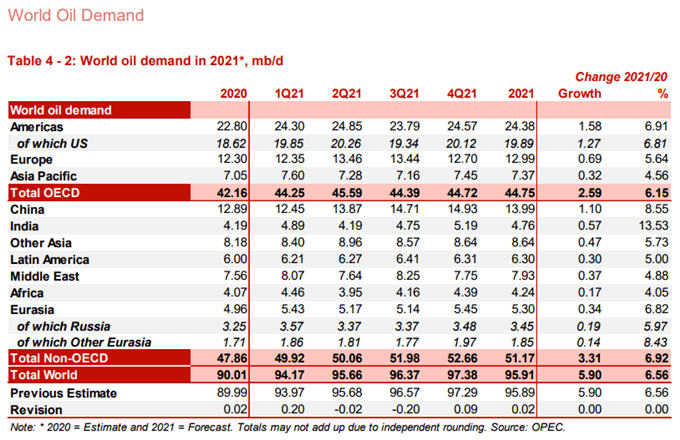 In turn, the ongoing efforts by OPEC and its allies may keep crude prices afloat as global demand recovers from the COVID-19 pandemic, and the price of oil may continue to exhibit a bullish trend ahead of the next JMMC meeting on March 3 as the MOMR insists that total OECD demand “is estimated to increase by 2.6 mb/d y-o-y but will still lagpre-pandemic levels.”

With that said, a further decline in crude inventories may keep oil prices within the upward trending channel established in November, and the price of oil may continue to retrace the decline 2020 high ($65.65) as long as US output sits at its lowest level since 2018.