The upward trajectory of US stocks appears to be underpinned by a weakening US Dollar, which has fallen to its lowest level seen since April 2018. The S&P 500 index has demonstrated strong negative correlation with the US Dollar index over the past 12 months, with a correlation coefficient of -0.80 (chart below). This is partly because over 40% of the revenue generated by the index’s constituents comes from overseas. A weaker US Dollar means that their overseas income will become more valuable when translating back to the home currency, supporting share prices.

Dollar’s weakness was primarily driven by renewed stimulus hopes as the US House speaker and Senate leaders agreed to support a bipartisan stimulus plan as the basis for a new round of negotiations. The bill appears to have received more support from the Republicans, raising prospects for a deal to be struck by end of the year. 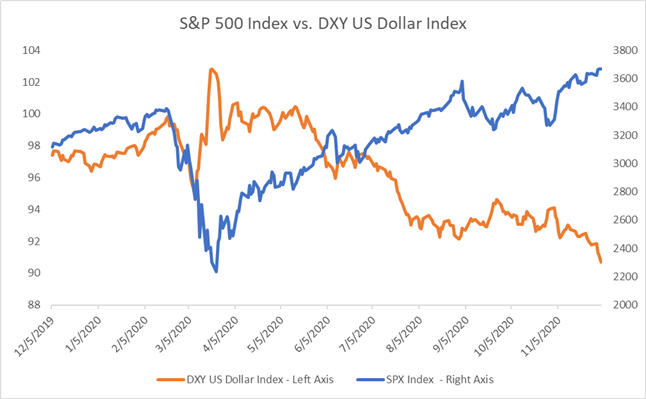 On the flipside, however, traders should be vigilant about a potential rebound in the US Dollar if the distribution of vaccines leads to a pickup in demand for goods and services (and thus inflation) and stronger fundamentals. The rollout of Covid-19 vaccines may allow people to gradually return to their normal spending patterns, leading to a surge in demand particularly for dinning, travel, retail and entertainment. This may point to higher pricing power in the months to come.

Besides, vaccines’ rollout may also shed reliance on future fiscal and monetary stimulus. This may potentially catalyze a rebound in the US Dollar.

The relatively low inflation base during April-June 2020 period may pave way for a rebound in Personal Consumption Expenditure (PCE) readings from Q2 2021 onwards (chart below). Although the Fed has revised its policy guidance to allow inflation to overshoot above its long-term target of 2% for some time, this doesn’t mean that currency market will stay calm when inflation starts to heat up. 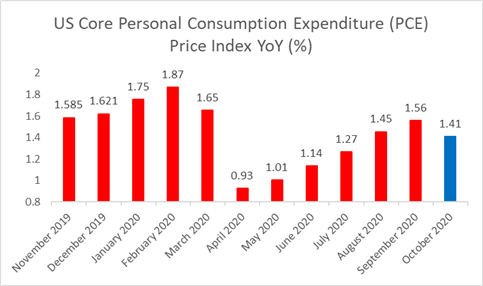 Valuation-wise, the S&P 500 index is trading at a 28.7 times price-to-earnings (P/E) ratio, which is the highest level seen in two decades and is well above its five-year average of 20.6. Rich valuation may render the index vulnerable to profit taking, especially if the Fed and other central banks signal to hold back monetary stimulus. As the US Dollar has entered oversold territory, a potential technical rebound may serve to hinder stock market’s upward trajectory.