Global market sentiment fared a somewhat neutral setting this past week as investors remain on the edge around US fiscal stimulus talks as the presidential election nears. The Dow Jones, S&P 500 and Nasdaq Composite began with week with outsized losses, spending the rest of their time trading sideways. This is despite what has been a rosy third-quarter earnings season so far.

The Euro and New Zealand Dollar were some of the best-performing major currencies. This is as the haven-linked US Dollar underperformed. For commodities, gold prices traded mixed while growth-linked crude oil erased gains it accumulated earlier in the week. The British Pound received a lift as the EU and UK resumed Brexit talks, but GBP/USD gave up gains into the weekend.

Next week is poised to be a busy one. US election polling and fiscal stimulus talks will remain in the spotlight. Treasury Secretary Steven Mnuchin said that Nancy Pelosi, the Speaker of the House, has ‘dug in’ and that there are still significant differences. White House Economic Adviser Larry Kudlow noted ‘it is going to be very hard to get it done’.

Meanwhile, major tech players will release their earnings including Facebook, Apple and Alphabet. Further rosy surprises could help cushion downside potential in equities. All eyes will also be on Q3 US GDP where a record bounce back is expected immediately following the worst quarterly contraction on record. European and Canadian growth data will also cross the wires.

The British Pound also remains glued to ongoing Brexit talks. French President Emmanuel Macron laid out the framework for compromising on fisheries, a key component of negotiations. The Euro and Japanese Yen are eyeing the ECB and BoJ rate decisions respectively. Meanwhile, Covid cases are on the rise globally. What else is in store of markets this week?

The longer-term EUR/USD outlook will hinge on Thursday’s ECB guidance; any hint of a further easing of Eurozone monetary policy would weaken it, but that is far from guaranteed.

The US Dollar may seesaw as investors navigate what could be a volatile week packed with US GDP data, rising Covid-19 cases, Q3 corporate earnings and more.

Talks between the EU and UK restarted today and will continue over the weekend as negotiators from both sides battle against the clock.

Stocks are set to endure a string of data releases with market-moving potential in the week ahead in the form of tech earnings, European GDP and more, even as the US Presidential election clamors for the spotlight.

Gold Forecast: XAU/USD at the Mercy of a Fiscal Stimulus Deal

Nasdaq 100 May Pull Back, Eyeing 50-Day SMA for Support

The Nasdaq 100 index looks set to pull back amid bearish momentum in the near term. The 50-Day Simple Moving Average (SMA) line may serve as an immediate support.

Gold Weekly Technical Forecast: Range Holds Ahead of US Election

A somewhat indecisive week for the precious metal, which maintains a narrow range ahead of the US election.

As we round our way towards a new week, Cable is within the confines of a bullish structure with beginnings back in September.

The Australian Dollar was under selling pressure this past week, but it held its ground. Bearish patterns brew in AUD/USD and AUD/JPY. Will EUR/AUD, GBP/AUD try to break higher again?

The US Dollar has spent much of October giving back September’s gains. Is there any hope for change? 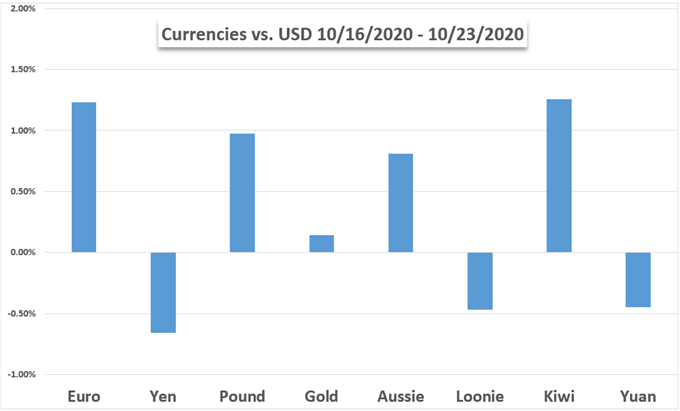