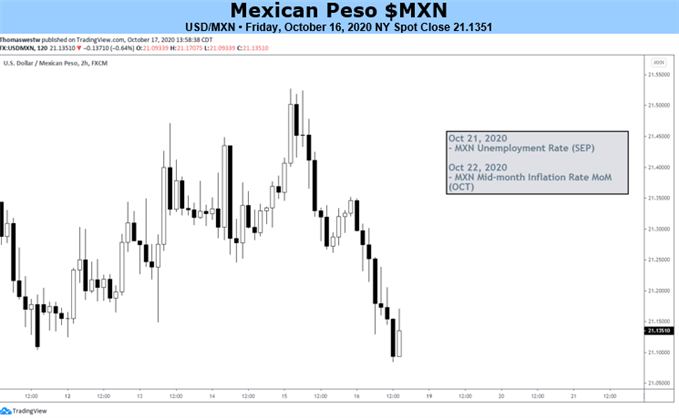 This past week we’ve seen uncertainty return to the markets and the Mexican Peso losing its winning streak against the US Dollar as US stimulus hopes fade given political impasse in Congress. The safe-haven Dollar managed to regain some upside momentum as traders fled from riskier assets in another intense selling spectacle in equity markets. USD/MXN managed to regain the 21.50 mark on Thursday but solid selling pressure continue to keep upside momentum capped.

Fundamentally, the Mexican Peso isn’t predicted to perform too well in the lead up to November 3rd as a contested election is likely, and the Mexican currency performs best when there is political stability an market optimism. Despite Biden having a lead in the polls, Donald Trump has already stated he will not offer an easy transition of power if he is seen as the loser, given he believes that mail-in voting is inefficient. This uncertainty is likely to keep a solid bid in the Dollar even if the Democrats continue to hold a solid advantage.

That said, the long-term effect of the elections on the Mexican economy are somewhat unclear. This is likely to depend on the future of the commercial relationship between the North American countries. Despite the US and Mexico having a largely stable relationship over the last few years, this situation depended mostly on Donald Trump’s mood swings and sudden bursts of protectionist measures. Analysts predict that a Biden presidency will bring more stability to commercial relationships, whilst promoting transparency, which would be a big boost for the Mexican Peso.

A lot is also going to depend on the stimulus efforts unveiled by the next President, as the Mexican economy is largely dependent on the recovery of the US economy, and some analysts believe that Biden is unable to offer the kind of support the economy needs right now. Also, let us remind ourselves that Kamala Harris was one of the 10 senators that voted against the creation of the US, Mexico and Canada trade agreement (USMCA) which passed congressed in January this year as the new ratification of the North American Free Trade Agreement (NAFTA).

She cited that “trade agreements can open up new markets to American products and forge new alliances with foreign countries, but they can also lead to job losses, depressed wages, and environmental degradation” and after a “careful study and consultation with environmental and conservation leaders, I have concluded that the USMCA’s environmental provisions are insufficient—and by not addressing climate change, the USMCA fails to meet the crises of this moment.”

So looking ahead at the next few weeks, a Biden lead is theoretically positive for the Mexican Peso but the uncertainty around a smooth change in power is likely to keep the US Dollar supported, leaving USD/MXN again at the mercy of news headlines as we head straight on to the final weeks of the election run.

From a technical standpoint, not much has changed since last week in regards to important areas to look out for. There continues to be a confluence of bullish pressure between 21.30 and 21.24, despite an attempt this past week to break below this level. Any further downside pressure is likely to take USD/MXN towards the 21.04 mark, where further buying support can be found, before approaching the lows since the beginning of March at 20.84, last seen in mid-September before staging an impressive rebound.

On the flipside, an increase in US Dollar demand is likely to take USD/MXN towards its monthly high in September around 22.70, despite there being important resistance areas ahead. The 50-day simple moving average is likely to bring increased selling pressure around the 21.60 area whilst a continued push higher could see the 21.85 resistance as a further challenge for the pair.