The anti-risk US Dollar and Japanese Yen weakened this past week as a revival in fiscal stimulus hopes bolstered global market sentiment. The S&P 500 gained 3.84% in its best week since late June. The tech-heavy Nasdaq Composite soared 4.56%. Anti-fiat gold prices capitalized on weakness in the Greenback, rallying for a second consecutive week alongside crude oil prices.

US policymakers inched closer towards a package. After initially calling off stimulus talks until after the November election, President Donald Trump turned a 180 as he signaled that he wants a larger package than what both parties have offered. The Democratic-proposed bill is about $2.2 trillion with Republicans now looking at a $1.8 trillion outcome.

Heading into the new week, Senate Majority Leader Mitch McConnell said that he doesn’t know if there can be a deal or not. Sentiment will also continue being influenced by polling data. Joe Biden’s widening lead against Trump has raised prospects of a larger-than-expected stimulus package. Meanwhile, the Federal Reserve seems to be sitting on the sidelines for the time being.

Brexit talks are supposedly heading into the final push this week, opening the door to British Pound volatility. UK Prime Minister Boris Johnson picked October 15th as the last do to potentially strike a deal with the EU. The third-quarter earnings season is also kicking off in the US with major financial institutions reporting. Australia releases its next jobs report. What else for markets next?

Gold’s resilience in the wake of fading fiscal aid hopes suggests that the price of Bullion may hinge on polling data ahead of US Presidential Elections in November.

Path of least resistance is higher for S&P 500 in the absence of notable catalysts. FTSE 100 eyes de-facto Brexit deadline

The UK voted to leave the European Union over four years ago and we are now heading into the week when both sides, potentially, will finally say ‘deal or no-deal’.

Crude oil prices may seesaw between fiscal talks and corporate earnings with Brexit woes and the policy implications for a growing number of Covid-19 cases.

The US Dollar could weaken as the markets bet on more fiscal stimulus. However, lackluster economic data could offset those losses as earnings season gets underway.

The Pound Sterling has popped higher over recent trading sessions against the US Dollar but struggles to make headway against the Euro. GBP price action also remains jumpy around Brexit headlines.

Despite a post-RBA sell-off from a huge zone of resistance, AUD/USD bulls put-in a higher-low and prices jumped for the final three days of this week.

The 200-Day SMA ($38.75) undermines the recent rebound in the price of oil as the simple moving average continues to track the negative slope from earlier this year.

Gold prices surged 4.2% off the September lows with the rally now approaching downtrend resistance. Here are technical levels that matter on the XAU/USD weekly chart.

EUR/USD and EUR/GBP can be expected to tread water ahead of the European Council meting that starts Thursday and will discuss both the Covid-19 pandemic and EU-UK relations post Brexit.

The S&P 500 index cleared higher highs after forming a bullish “AB=CD” pattern. An immediate resistance can be found at 3,500 - the 100% Fibonacci extension. 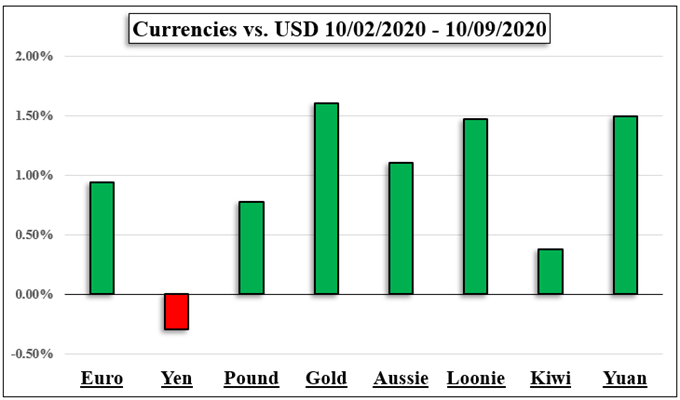