The S&P 500, a frequent bellwether for general risk appetite, extended losses into a third consecutive week. The tendency for economic data in the world’s largest economy to surprise higher has been shrinking since the middle of July. Catching a bid lately has been the anti-risk Japanese Yen and to a lesser extent the haven-linked US Dollar.

Recommended by Paul Robinson
Don’t give into despair, make a game plan
Get My Guide

This past week, the Federal Reserve might have left investors wanting more, especially on the quantitative easing aspect. Doubts over further US fiscal stimulus may have also played a role in keeping the USD suppressed. Sentiment-linked Crude Oil prices were on the rise, bolstered by a combination of falling US crude inventories and compliance in output from OPEC+ producers.

With that in mind, all eyes turn to testimony from Fed Chair Jerome Powell and Treasury Secretary Steven Mnuchin. They will be talking before the House Financial Services Committee on the CARES Act. Across the northern border, the Canadian Dollar will be eyeing Prime Minister Justin Trudeau. He will be offering a new agenda for a spending plan amid the economic recovery.

Following recent strength, the New Zealand Dollar awaits this week’s RBNZ monetary policy announcement. Informal contacts between the United Kingdom and the European Union around Brexit may drive volatility in the British Pound and Euro. Volatility risk, as shown by the VIX ‘fear gauge’, seems to be on the decline however. What else is in store for markets ahead?

The outlook for the EUR/USD pair has worsened after its failure to move back to the high just above 1.20 touched on September 1 despite the ECB’s decision earlier this month not to talk down the Euro.

The Japanese Yen may continue to exhibit a bullish behavior as the Bank of Japan (BoJ) appears to be in no rush to alter the path for monetary policy.

The US Dollar may fall if demand for haven-linked assets fall after testimonies from Powell and Mnuchin to the House. Better-than-expected data may compound the Greenback’s selling streak.

Technology stocks continue to be a source of weakness for US equities, undermining risk appetite. Meanwhile, US-China tensions simmer beneath the surface creating uncertainty.

Sterling remains trapped by overarching fundamentals drivers and both GBP/USD and EUR/GBP are going to have to wait until the Brexit dust settles.

The Dollar has bottoming potential, but that is starting to lose weight as it fails to sustain any lift; next week could be a big one for USD’s near-term outlook.

Oil prices saw a reprieve to the recent selling pressure but remain at risk while below downtrend resistance. Here are the levels that matter on the WTI technical chart.

Australian Dollar Forecast: AUD/USD May be Setting Stage for Reversal

It was a quiet week in Aussie as AUD/USD put in its second consecutive week of indecision. But taking a more granular look highlights the potential for a reversal scenario.

The S&P 500 index may struggle in the near term – drifting sideways within the bounds of its Bollinger Band – but the overall trend still looks bullish. 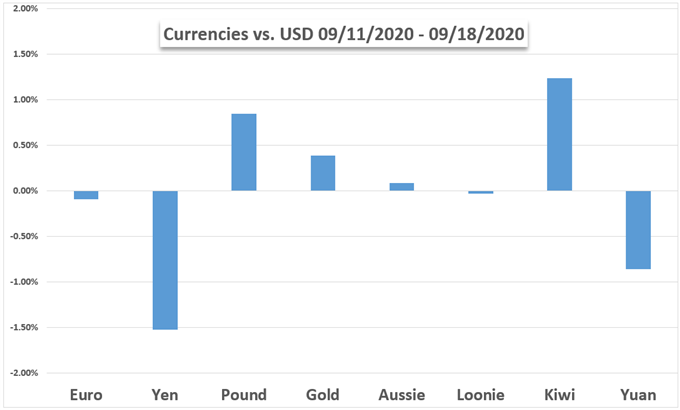