Market volatility picked up pace this past week, with the Dow Jones and S&P 500 pulling off their worst performance since June. Meanwhile, the tech-heavy Nasdaq 100 slumped the most since March. The VIX ‘fear gauge’ soared the most since June. In the FX space, the haven-linked US Dollar outperformed most of its G10 counterparts. Growth-linked crude oil wobbled.

Historically speaking, September typically brings volatility back into financial markets as traders slowly return from the summer lull. This time around, there are concerns about lofty valuations in information technology shares. An upbeat US jobs report for August seemed to have helped offset dismal ISM services from Thursday.

The new week is shortened by the US Labor Day holiday on Monday, draining liquidity and raising the risk of volatility. As such, breaking news over the weekend could sour market mood further. Since equities bottomed in late March, extended selloffs in equities have been few and far between with most central banks around the world maintaining accommodative monetary policy settings.

This could be once again tested, not just this week, but this month as the 2020 US Presidential Election inches closer. On tap are the European Central Bank (ECB) and Bank of Canada (BoC) for Euro and Canadian Dollar traders respectively. What else do financial markets face in the near term?

Learn about trading global equities
What Do Other Traders' Buy/Sell Bets Say About Price Trends?
Register for webinar
Join now
Webinar has ended

This Thursday’s meeting of the European Central Bank will likely end with confirmation that the ECB will do everything it can to stop EUR/USD from strengthening above 1.20.

The Canadian Dollar may fall if the Bank of Canada Rate decision inflates selling pressure in tandem with gloomy economic data out of the United States.

Gold prices may trade range-bound as XAU/USD echoes the divergence between Treasury yields and the US Dollar. What could be a downside risk for the yellow metal?

The latest EU/UK trade talk commentary suggest that talks are going nowhere with both sides refusing to budge from their original positions.

Equity markets suffered a sharp reversal last week despite encouraging economic data out of the United States. Now, investors will keep a keen eye on the performance of tech stocks for further clues.

The US Dollar’s tentative recovery to start the month of September may prove short-lived, as the Greenback’s plunge through long-term support hints at extended losses.

AUD/USD appears to have established an upward trend in the second-half of 2020, but a break of trendline support may open up the 50-Day SMA (0.7120).

Sellers made a crude re-appearance this week after a robust series of trends developed since March. The big question now is for how long might bears hang around for? 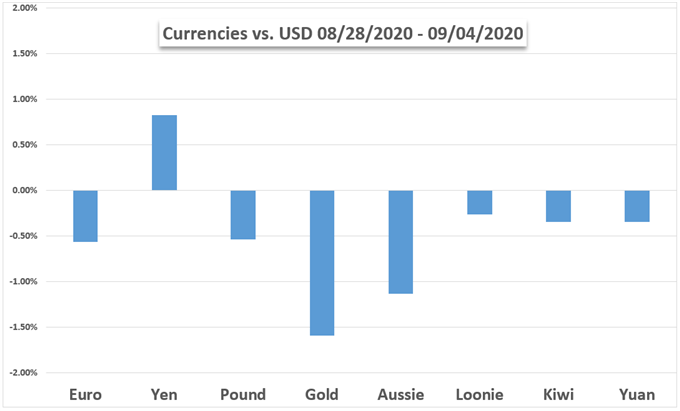