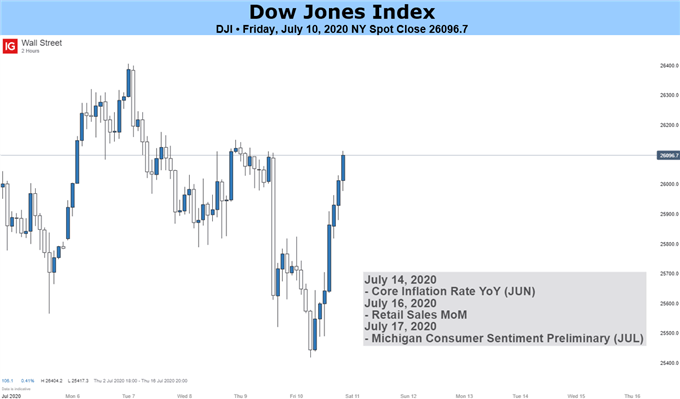 The Dow Jones and S&P 500 head into the second-quarter earnings season with the Federal Reserve slowing balance sheet growth, implying diminishing policy support. On the chart below, the central bank has seen its asset holdings shrink for four consecutive weeks. A downshift in Fed efforts to keep credit markets lubricated from the vigorous simulative push earlier this year amid the coronavirus outbreak could be keeping stock markets from setting new highs.

Recommended by Daniel Dubrovsky
What is the road ahead for stocks in Q3?
Get My Guide

The Nasdaq Composite has been the exception as investors likely anticipate the tech sector to fare relatively better during the pandemic. That means its comparatively elevated valuation will be heavily scrutinized during this earnings season which gets underway with major financial companies. These include JPMorgan, Bank of America and Wells Fargo. The latter announced it was preparing for thousands of job cuts this past week.

US coronavirus cases have been surging as of late, but this has not materially impacted the outlook for GDP growth at this point. Towards the end of last week, certain states began reporting record daily death rates. Fatalities have on the whole not been following the trend in rising confirmed cases. But should this change, reimposing lockdowns to stem additional outbreaks risks damaging economic growth and thus equities. 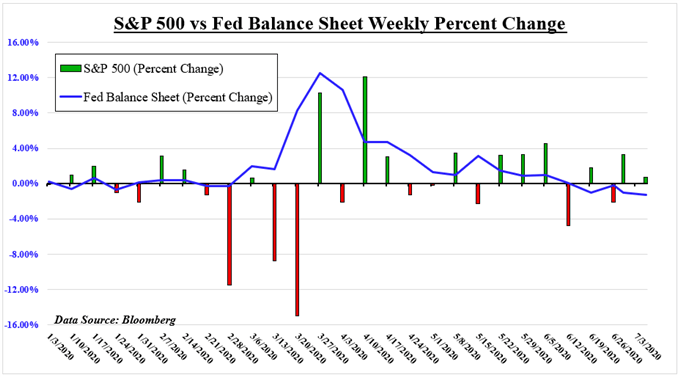 Across the Atlantic, the German benchmark stock index – the DAX 30 - is also arguably tied to fundamental developments from the world’s largest economy. A sudden surge in risk aversion there could spill over locally. Focusing on more regional developments, the European Central Bank monetary policy announcement is due on Thursday. Traders will be closely watching for any adjustments in its emergency bond-buying program.

What could be a greater source of volatility is the meeting between leaders of the 27 European Union nations in Brussels at the end of the week. There, the regional bloc will come together to attempt finding agreement on a €750 billion rescue package meant to alleviate coronavirus-linked economic weakness. German Chancellor Angela Merkel said that Europe is in its ‘most difficult situation of its history’.

Unanimous approval is needed, and a struggle could induce aggressive risk aversion in the event that much-needed support is put into jeopardy. This is as Eurozone economic data surprises remain on the cautiously pessimistic side – see next chart below. The DAX 30 has been tellingly idling in the meanwhile. This week, it also awaits Euro-Area and German ZEW economic sentiment surveys. 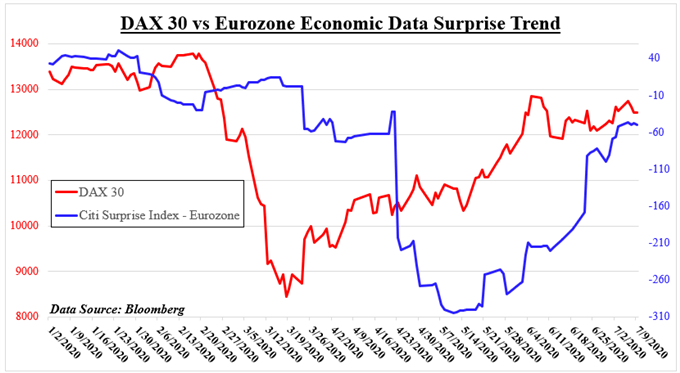 The United Kingdom benchmark stock index – the FTSE 100 – is also stalling alongside the DAX 30. UK 2020 GDP estimates continue to dwindle, perhaps explaining recent declines – see chart below. Further insight will be revealed into local growth this week. On Tuesday, monthly GDP prints will cross the wires. Growth is expected to rise 5.3% m/m, up from a sobering -20.4% in April.

On the same day, the UK’s Office for Budget Responsibility will publish scenarios on how the coronavirus is impacting the economy as well as public finances. This is as Prime Minister Boris Johnson pushes to reopen gyms and pools this month. Global coronavirus cases have been rising, steadily increasing the 7-day moving average. The possibility of a turnaround in lockdown-easing efforts could keep equities at bay. 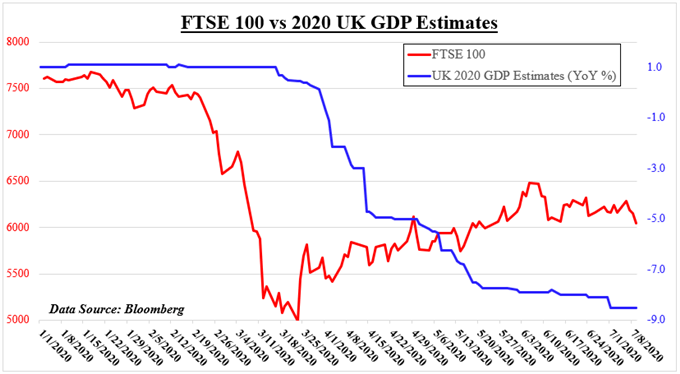