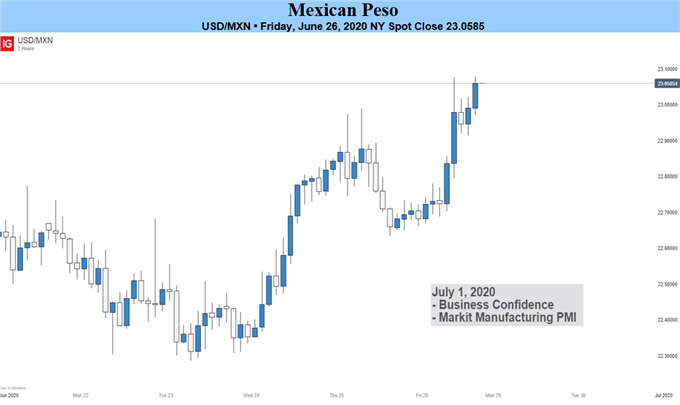 The Mexican Peso was unable to retain buyer interest leading USD/MXN to end the week higher. Volatility seems to have returned as new Covid-19 cases continue to emerge around the United States and Latin America, a situation that benefits only the Dollar.

As an attempt to ease worries about the Mexican Economy, Banxico - Mexico’s Central Bank – announced on Thursday that they were cutting interest rates by 50 basis points to 5%, amounting to its 9th consecutive cut, bringing the rate to its lowest since September 2016, when it stood at 4.75%. Despite the rate cut, the central bank has remained quite cautious with its monetary policy, as the Peso still enjoys the benefits of traders looking to profit from carry trade, with an inflation-adjusted interest rate that remains much higher than those of developed currencies.

In their policy statement, the Monetary Policy Committee noted that the measures taken to prevent the spread of Covid-19 had significantly affected economic activity worldwide, and inflation expectations had fallen to undesirable levels, allowing for interest rates to continue to be depressed. The central bank expects the contraction seen in the first quarter to have been exasperated in April, so the data for the second quarter may be much worse, despite the fact that the economies have started to slowly recover.

This is likely to leave the Peso struggling to find support in the coming days, especially with new virus cases rising at an undesirable rate in the American continent. The shift of capital towards safe-havens like the Dollar will lead USD/MXN to halt recent declines as traders focus on finding an equilibrium between the positivism generated by the re-opening of economies and the reality that the road ahead is going to be tough, which will continue to hinder risk sentiment.

Since the lows seen on June 9, USD/MXN has been edging higher, but gains have not been easily kept. We have seen a clear increase in volatility, which has left an uptrend line marked by the higher lows. As mentioned last week, recent gains have made entry more attractive to speculative sellers, and on Thursday we saw a rejection at 22.98, leaving it as a key resistance area in the coming sessions. A closeabovethis level has meant a chance to re-enter into the 23 pesos per dollar area, where the 38.2% Fibonacci retracement converges, leaving bulls heading for May's highs at 24.89.

If bulls are rejected again, it would be key to see a break in the uptrend line to confirm that sellers are regaining control. A close below 22.40 puts support at 22.17, where the 50% Fibonacci retracement converges, with the goal of falling back below 22 and returning to the bearish path below 21.45.