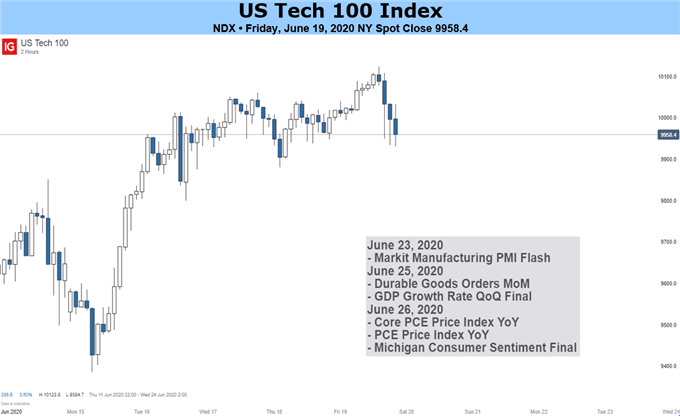 After climbing above 10,000 for the first time in history just two weeks ago, the Nasdaq 100 has seen its ascent slow as investors juggle the threat of a second coronavirus wave with accommodative monetary policy. Although the Federal Reserve and other major central banks have pledged further assistance, should it be required, it seems the market cannot fully disregard the implications of another possible lockdown period.

Thus, a degree of apprehension has seeped into the tech-heavy Nasdaq which has long been the leader of the price recovery. A simultaneous pause has occurred in the expansion of the Fed’s balance sheet as it recorded its largest weekly decline this year last week, around -1 percent, and it is unlikely the two occurrences are entirely coincidental. Either way, as the trailblazer of the recent recovery, the slowdown in the Nasdaq’s climb has spilled over into other indices as the Dow Jones, S&P 500 and others meander beneath recent highs. 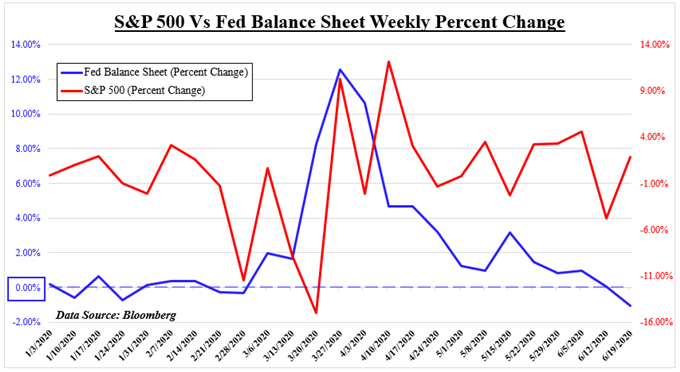 Consequently, it can be argued the Nasdaq 100 remains closely tied to the Fed’s balance sheet expansion and covid developments. As it stands, multiple Fed officials have hinted that the economy may take longer to recover than many are currently expecting, but as Chairman Jerome Powell has already vowed to act “aggressively and proactively” to keep the economy afloat, market participants can be assured the central bank is at their back. Therefore, it is difficult to suggest a sharp reversal can gather steam in the current climate, unless a new threat emerges.

German stocks were thrust into the headlines this past week amid the Wirecard scandal, but given its status as one of the smallest DAX components, the scandal seems to have had little impact on the index’s price. Indeed, what may prove to be more harmful over time is the damage it dealt to investor confidence in some of the country’s other fledgling tech stocks. As the DAX 30 lacks significant event risk in the week ahead, it may be left grasping for influence as a result.

Without drivers of its own, it can be expected the German equity index will track – at least to some degree – the leading indices in that of the Nasdaq 100, Dow Jones and S&P 500. That being said, IG Client Sentiment data suggests bearishness may be on the horizon, so keeping a tab on fundamental and technical developments may prove fruitful.

Much of the same can be said for the FTSE 100 which finds itself devoid of major event risk. To be sure, Brexit developments may play a role, but the recent liquidity provided by the Bank of England may help to offset any negative proceedings. Either way, the FTSE 100 might be along for the ride as market participants weigh the likelihood of a second coronavirus wave. In the meantime, follow @PeterHanksFX on Twitter for updates and analysis.