USD/MXN Outlook: Risk-On Recovers Swiftly but Road Ahead is Bumpy 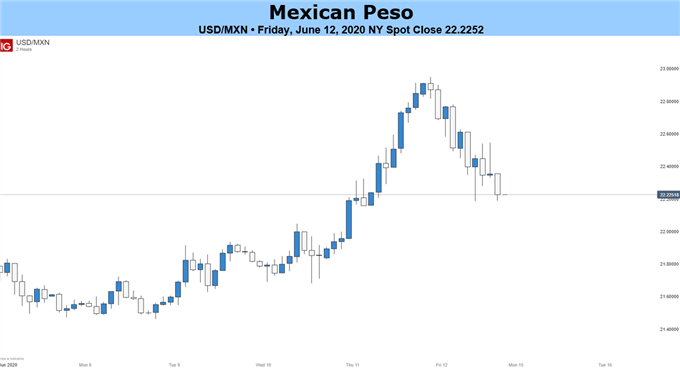 Following Thursday’s battering of the Mexican Peso along with other EM currencies, risk-on sentiment returned to finish off the week as Friday saw a recovery of two thirds of Thursday’s losses, leaving USD/MXN just 3.6% higher in a week dominated by the Fed’s bleak recession warning as Covid-19 cases re-emerge around the world. Also adding on to the weakness in the Peso was the tumble in oil prices, with spot US crude down 6.9% on the day, as a surprising rise in US inventories delivered another blow.

The dollar re-emerged as a sought after safe-haven when the Federal Reserve said on Wednesday that the impact of the coronavirus will be felt for years and would lead to a 6.5% contraction of the US economy in 2020, nothing we didn’t already know. But markets had been venturing into the overbought territory for a while on hopes of a swift recovery once virus cases were under control, and a dose of reality was all it took to freak investors into moving their capital.

Bond yields, which had managed to rebound slightly in June, tumbled back down to monthly lows as investor’s demanded a refuge from high yielding risky assets. Seeing this behaviour, the road ahead looks rocky for risk-on assets as markets continue to push higher despite a lack of fundamental support, and any economic warning can be taken as a catalyst for the next sentiment-driven move. Further corrections are to be expected but buyer support seems to hold steady for now, limiting a sustained depreciation on the near horizon.

On the Mexican side, shares plunged almost 4% on Thursday, tracking declines on Wall Street on the back of concerns over a second wave of infections. The dire economic data published in April might have marked the bottom, but expectation of further negative readings will put pressure on Mexican policymakers to add further stimulus to the economy, possibly adding some more support for the Peso in the near term.

From a technical perspective, the rally in the Peso has come under fire and it’s continuity is debatable as USD/MXN has crossed above it’s 20 day moving average. Only a short-term pullback below 22.00 could see further downside pressure testing the 3-month low at 21.45, but the pair seems to have found support around the 50% Fibonacci retracement at 22.17, but immediate re-test of Thursday’s highs is unlikely, leaving 22.90 as the next area of key resistance, followed by 23.49.