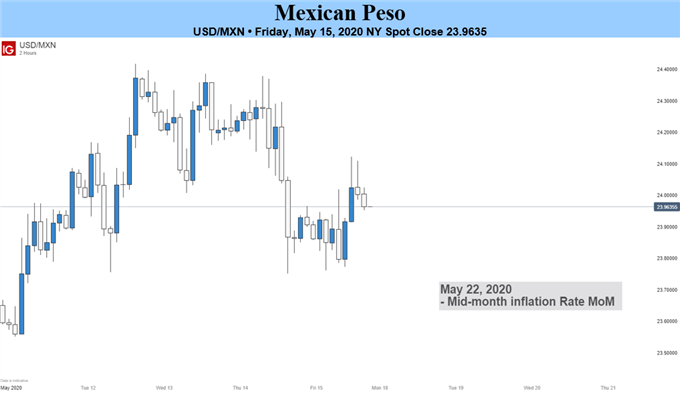 A lot has happened this week for the Mexican Peso, but investors’ attention has remained focused on the ongoing China-US trade wars, causing another round of flight to safety, which has seen a broad-based push in the US dollar against most currencies. But the Peso has remained resilient despite investor sentiment souring, and this is mostly to do with the Central Bank’s 6th rate cut in the last 6 months.

Banxico announced on Thursday that its main interest rate would be cut by 50 basis points to 5.5%, the third 50 basis point cut in the last 6 months. The decision brings the rate to its lowest level since November 2016, but markets seemed to take the announcement as good news for the Peso, taking USD/MXN 2.5% lower on the day.

In his statement, the Governor noted that the impact on the virus was taking its hit on the productive activity of the country, leaving inflation far from its 3% target, and despite not knowing how long the virus will continue to have a material impact on the economy, the worst is yet to come in the second quarter.

The good news for the Mexican currency is that its inflation adjusted interest rate was one of the highest at the end of last year, giving ample wiggle room for Banxico to adapt its monetary policy. This gave MXN an advantage when looking at carry trade value, where currencies with higher rates see an influx of investors from lower-yielding currencies. And despite the virus wiping out most of the attraction from the Peso as investors fled to safety, the Mexican Peso is still better positioned than other emerging market currencies when investors renew the search for higher yields for their capital.

On top of that, Banxico is prepared to further aid the economy if necessary, prompting some investors to believe that interest rates could continue to fall around the 4% mark, giving MXN a push in the short-term as the risk of triggering outflows is still low.

When looking at the 4-hour chart we can see that recent price action has consolidated into a symmetrical triangle, capping USD/MXN moves between 24.46 and 23.62. As the narrowing of the triangle formation comes to an end we expect to see a significant directional push for the pair, with bearish momentum intensified below the 24.00 mark.

Momentum indicators like the MACD and simple moving averages suggest that downward pressure on USD/MXN will continue in the near future, with the 23.6% Fibonacci retracement level from the April highs seen as an immediate resistance at 24.08. This would cause sellers to target the lower range of the triangle, with a push below 23.65 seen as bearish break of the formation sending USD/MXN to test monthly lows around 23.25.

If, however, buyers are able to push past the immediate resistance we could see a bullish break of the triangle pattern, leaving the pair with no critical downside pressure until reaching May’s high at 24.89, before heading higher towards the 25.00 handle.