Sentiment broadly improved into the end of last week as the Dow Jones and S&P 500 pushed higher. The haven-linked US Dollar trimmed gains as the similarly-behaving Japanese Yen followed suit. The growth-oriented Australian and New Zealand Dollars outperformed. Even crude oil prices managed to capitalize on investors’ optimism despite record-dismal non-farm payrolls.

Recommended by David Cottle
Don’t give into despair, make a game plan
Get My Guide

That the latter is now seemingly following market mood underscores hopes that economies around the world are gradually moving towards easing lockdown measures. A resurgence in travel as businesses begin reopening could have the scope to alleviate surpassed demand for energy. This is also as US-China trade war fears appeared to have been cooling over the past 5 trading sessions.

The markets shrugging off disappointing economic data – at least for the time being – likely shows that traders are looking to the future. Central banks from Australia to England highlighted last week that mind-boggling declines in GDP could be reversed in 2021. Though they also acknowledged uncertainties around the speed of a recovery depending on how the virus unfolds.

Recommended by David Cottle
Are retail traders leaning into momentum or fighting it?
Get My Guide

Similar rhetoric could be due from the Reserve Bank of New Zealand ahead. It is unclear how much scope there could be for data to materially shift Wall Street’s trajectory for now. US retail sales and consumer sentiment are due at the end of the week. Yet, traders should also acknowledge the reduced urgency for more stimulus. Growth in the Fed’s balance sheet has been slowing.

EUR/USD has fallen steeply on a bearish German court ruling and some dire economic forecasts from the European Commission. The question for the week ahead is whether all the bad news is now priced in.

The Australian Dollar has risen sharply from its coronavirus-inspired March lows, but like all other growth correlated assets must now likely face some grim economic data.

The US Dollar remains glued to the trajectory of the Dow Jones, S&P 500 and Nasdaq Composite. As slowing virus cases result in gradual lockdown easing, the urgency for stimulus may slow.

The price for gold may attempt to break out of its current range if the RSI clears trendline resistance and negates the bearish formation carried over from April.

Global stock markets are recovering but some at a pace that wouldn’t take much to knock over; we take a look at some levels and possible outcomes as the new week approaches.

Crude Oil Prices May Resume Down Move After Rebound

Resiliency by the Japanese Yen in pairs like EUR/JPY, GBP/JPY, and USD/JPY bode well for the future – despite near-term reversals. 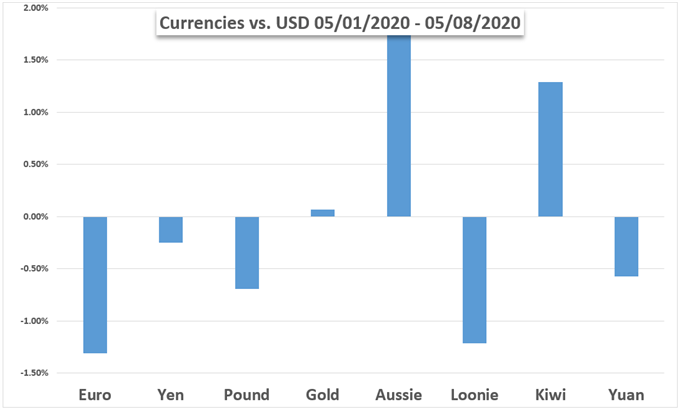