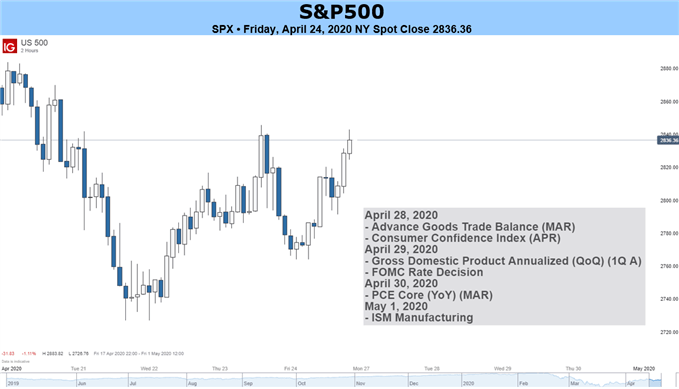 Economies are now beginning to look at re-opening, however, the question remains as to what a post-lockdown world will look like. This is particularly tricky given the risk of a second wave of COVID-19 infections. Over the coming week, economic data will provide further evidence as to just how severe the impact of COVID-19 and subsequent lockdown measures have been across the globe. Focus on US and Eurozone GDP figures, alongside the ISM Manufacturing Survey. In light of recent sentiment surveys (Markit PMI), it is widely expected that economic growth will show a sizeable contraction. On a stock-specific front, Apple is due to announce its earnings on April 30th.

The past week has seen modest losses for the S&P 500 (2.7% at the time of writing) as hopes of a potential vaccine for COVID-19 in the short-term had been dampened after Gilead’s drug failed at its first trial. That said, while equity bulls may take comfort from the pullback in volatility, as we have noted previously, the peak in the VIX does not necessarily mean the bottom for the equity market. As such, given that the macro-backdrop remains weak (data to confirm as much), this begs the question as to whether we are following the 2008 pattern.

Month-end rebalancing may also play its part in curbing further upside in equities as investors look to rebalance their portfolios. Of note, US equities have gained 7-8% since the beginning of April.

Figure 1. Is this a Bear Market Rally? 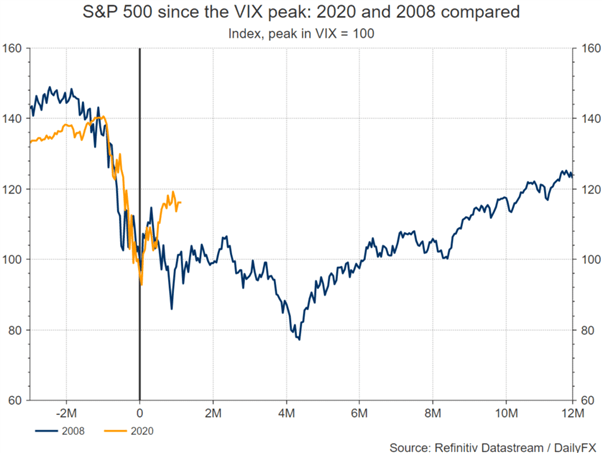 Details of the Federal Reserve policy meeting will be announced on Wednesday. However, while there are no expectations of fresh monetary policy measures, given the significant stimulus already announced, eyes will be on any changes to current credit measures. Alongside this, the Fed will also likely reaffirm its commitment to stand ready and ease further if necessary.

Following the lack of progress made at the EU Summit, the focus will shift back to the ECB with Chief Lagarde expected to elaborate on the potential implications that the “Too Little Too Late” (in Lagarde's own words) will have on the ECB. With the ECB already announcing crisis tools, little is expected in the way of new policy measures at this weeks meeting. Particular focus has been on the Bund/BTP spread, which had widened to the highest level since the ECB’s PEPP announcement. 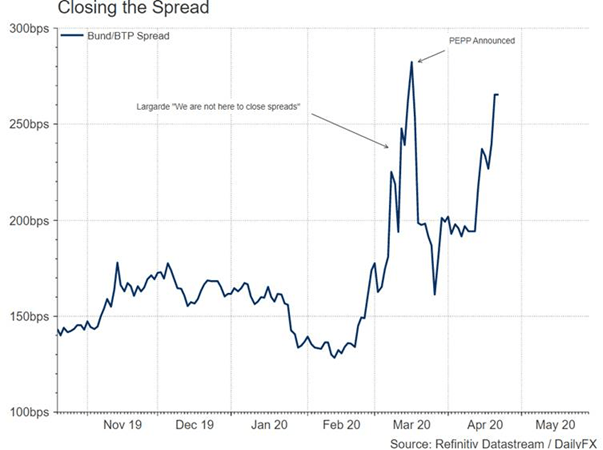 While Brexit may have been easily forgotten due to the focus on COVID-19, this week provided a reminder that Brexit is still a key risk to the UK. Round 2 talks yielded little in the progress with both the EU and UK stating that Brexit stances remain wide apart. The next round of talks will be from the week beginning May 11th, but expect Brexit risks to become elevated in the run-up to the June 30th extension deadline. Key resistance situated at 2900-50.